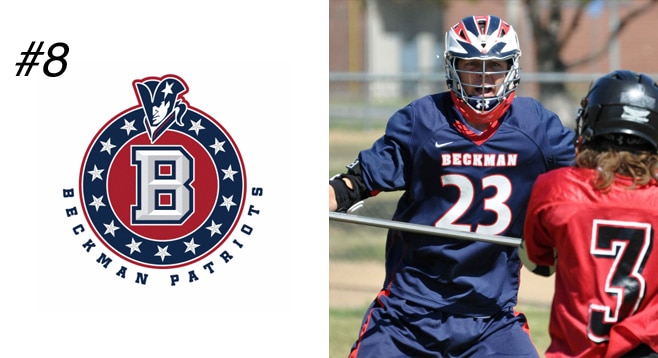 Number 8: Beckman is one of the oldest programs in Orange County and will lean on 16 returning seniors to lead them through the year.

First-year Coach Brendan Finnerty, who coached at Trabuco Hills for the past three seasons, will lead one of the most athletic teams in Orange County this season as he and former Capo Valley coach Joel Schmit-Kalas take over the Patriots program.

The core of the Patriot offense lies in three towering attackmen Alex Knox, Trevor Keene and Wesley Filipek. Keene is the reigning Pacific Coast League MVP and is returning for a strong senior season. Physically, these three will be hard to stop. The Beckman offense embodies a hard-driving dodge which Knox and Keene excel at. They both are quality shooters who will prove tough for man-down defenses to stop. Nick White will be fun to watch at midfield. He has quick feet and is a one-man clearing team. White also dodges hard and his awareness let’s him take advantage of early and late slides to facilitate team involvement. Holding it down on the defensive end will be Adam’s State commit Tanner Culley and goalie Matt Allen. With Culley’s size and athleticism the Patriots should prevent good shots and enable Allen to make save after save. Allen played exceptionally well against Foothill at this year’s Air Station Shootout. We expect that he will bring the same level of play throughout the year.

“Our goal this year is to continue to grow as individual players and together as a team in a new exciting system,” said Finnerty. “Our main goal is to capture league and gain the best seed possible entering the playoffs. After that we will take it one game at a time to work towards a CIF Championship.”

The Patriots return 16 seniors with one goal in mind, a CIF Championship.

“Our main coaches are coach Joel Schmit-Kallas and me,” said Finnerty. “Joel has put in a great system for the defense and I am developing a more team-style of offense for the upcoming season. To be successful we will have to operate as a single unit, not as individuals.”