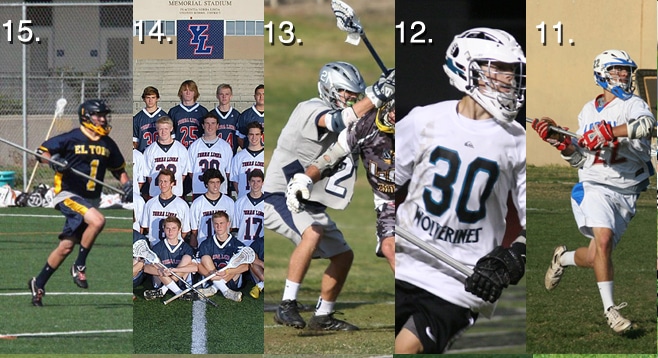 Stay calm. Be patient. It will be here before you know it. Just 10 more days to opening day for the boys 2014 season. With the increasing competition, the lacrosse hierarchy is changing. Some traditional powers have fallen out of the Top 10 (at least for now) while some newcomers are knocking on the Top 10 door, saying let me in. Hear we go with the preseason 11-15 rankings.

Coach Andy Salcido and the Chargers will compete for a South Coast League title with their trademark blue-collar approach to lacrosse. Key returnees include junior Parker Core, a 2nd Team All League midfielder in 2013 and junior midfielder Jason Hastings who earned honorable mention All League last year.

The Mustangs are a team on the rise. Their record has improved from 5-10 in 2011 to 9-8 in 2012 to 16-2 last year. Not ready to rest on their laurels, the Mustangs have strengthened their schedule considerably this year by adding St. Margaret’s Episcopal School, Huntington Beach, and Great Oak. Players to watch include 1st Team All League and Spanish National Team player Ryan Viadero at midfield, and 2nd Team All League performers Mitchell Flood (defense), Kevin Anthony (defense), and Jack Diedrich (midfield).

Head Coach Mark Todd and the Sailors look to rebound from a disappointing season in 2013. They will have their work cut out for them in a league that includes Huntington Beach High School, Los Al, and a steadily improving Marina High School.

Despite an impressive 11-7 record, the Griffins five-year reign as league champions ended last year. The Griffins are hoping that Chris Jewett can lead them back to Sunset League supremacy in his first year as head coach. Jewett will rely on Second Team All-League faceoff specialist Brandon Ezell (2nd Team All League), Ty Miller (2nd Team All League), and Cody Miller (Honorable Mention All League) to carry the offensive load. Senior defenseman Cole Somers will provide leadership at the other end of the field.