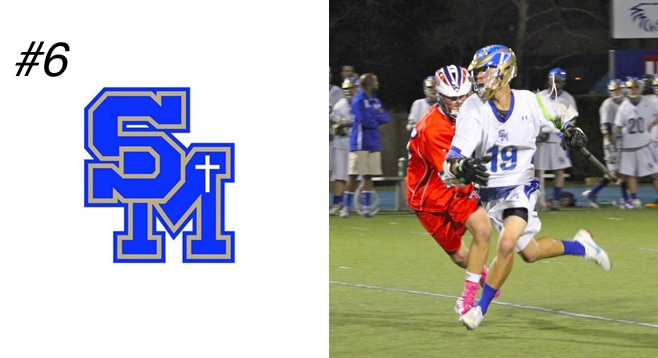 Number 6: Santa Margarita Catholic High School enters 2014 with a new coach, a new attitude, and some new faces.  The Big Three–seniors Ravi Dhouni, Hayden Ruiz, and Wes Schuler–hope to lead the Eagles back to prominence after a disappointing 2013.

The Eagles have been the Jekyll and Hyde of Orange County lacrosse for the last few years.  Following a mediocre record during the regular season in 2012, the team got hot and came within a few minutes of advancing to the division final. The Eagles entered 2013 with high expectations and seemed poised for a championship run when they opened the season with a 3-0 record.  Then the Dr. Jekyll side of the personality appeared with the Eagles losing 12 of their final 16 games. Coach Guy has 16 returning seniors and some impressive young talent to work with as he takes on the task of getting the Eagles to play to their potential.

Ruiz (Boston University) and Schuler (Manhattan) will be the focal points for most opposing coaches’ game plans. Ruiz can do it all: Shoot, pass, dodge, left hand, right hand, you name it.  He will be one of the most difficult matchups in the OC this year.  Schuler, a football player, is a tank with a D1 rip from up top. Seniors Michael Senecal and Drew Webster, juniors Andrew Kofoed (16 goals last year) and Nico Houser, and sophomores Zach Taylor and Logan “Doc” Dochterman can all capitilize when teams pay too much attention to Ruiz and Schuler.

Look for the defense to be much improved this year with Guy, a former Ohio Wesleyan University defenseman, as the head coach. The defense will be led by the versatile Dhouni who can play LSM or close D with equal effectiveness. Dhouni is a takeaway artist and a clearing threat. Senior Avery Beck is an underrated solid three-year starter. Sophomore Eric Ruback is a big, physical defender who likes to clear the crease and and gives Guy another clearing option. Junior Max Vought  steps into the starting goalie position after an impressive preseason.