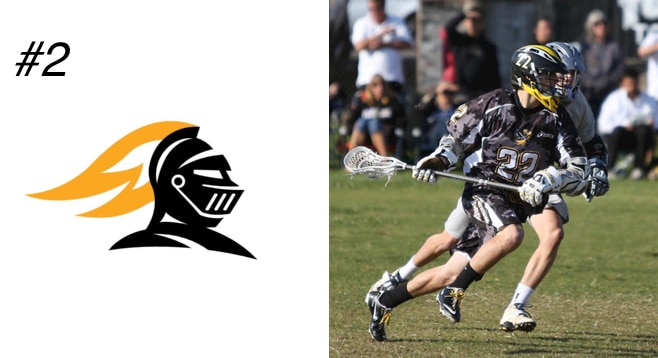 Number 2: The most storied program in Orange County is back in the spotlight after coming up short in 2013. Coach Jon Fox and the Knights are looking for their first championship since 2011.

Back-to-back trips to the semi-finals would be cause for celebration at most schools. Not at Foothill High School, a program that won five CIF Championships in a row prior to 2012. The Knights have the talent and motivation to bring home another trophy in 2014.

Junior attackman Nate Marano is no secret. The big, powerful lefty has already committed to play attack for Denver University in the Fall of 2015 and deserves it. He has the ability to get his hands free in even the tightest pressure, and he loves to take the ball to the net in any circumstance. Improved footwork off ball he will make him even more of a weapon for the Knights. Joining him at attack are senior Nick Matzek and sophomore Kevin Kodzis (Holy Cross). Matzek has stepped up his game for his senior year and is a pure finisher. Kodzis is shifty and has great field vision that will allow him to hit Marano for time and room opportunities.

Warren Case and Ryan Falbo are Foothill’s leaders at midfield. Two-way middies are hard to come by in high school ball and Foothill has two in Case and Falbo. Locking it down on the defensive end is Owen Geiss (Gordon College). He has great agility for his size and uses his height to close on attackmen extremely quickly. Coach Fox will have to make a tough decision in goal. Both Hank Lewis and Ryan Blank are goalies that could start on any OC team.

If Foothill can stay healthy, they will be one of the teams to beat in all of California.