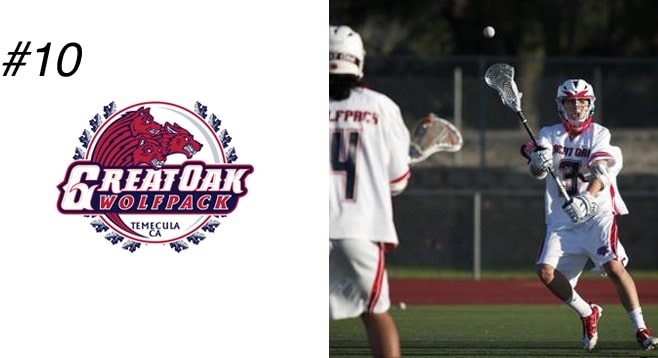 Number 10: Great Oak (Temecula) has gained traction over the last few years, and is now recognized as a team that can compete with the best on a regular basis. With Karl Rohlin back at the helm for his ninth year since starting the program, the Wolfpack look to improve upon last year’s 12-6 record with big wins against Orange County and San Diego opponents.

Coach Rohlin has worked tirelessly to build a selfless team identity where all players are looking for their teammates first and then score second. The Wolfpack have become known for their blue-collar style of play, and don’t expect that to change this season. Coach Rohlin says he is pleased with the way his player players have gelled well this fall and winter, and the team may be primed to advance deep into the post-season playoffs for the first time.

Leadership roles will fall on a few returning seniors, most of who run the middle of the field and will contribute for both set of sixes. Middies Weston Gotuzzo, Scott Hillock, and Hunter Burgette anchor the senior class by aiding the offense and defense equally. Attackman Hunter Campbell will especially benefit from middies that can get the ball in his hands. Campbell is a complete attackman that defenses will have a hard time stopping. Junior Goalie Grant Christman is a second-year starter and a beast; he stepped in goal for the majority of games last year with a broken hand. Rohlin will count on senior face off specialist Dakota Campbell to sustain momentum and stop opponents with crucial wins at the face off x.

Rohlin is cautiously optimistic about his team’s prospects in 2014, “We lost a lot of seniors last year and we always do because I rarely cut players. The difference has been the talent level of the incoming freshmen players over the last two years. We now have incoming freshmen who are varsity level players or contenders to be varsity level players. Therefore, the overall talent level of our team has improved. Two incoming freshmen varsity players to watch this season are Kendal Dizon (goalie) and Justin Barragan (LSM). We also have three returning Varsity sophomores Jacob Yordy (D and LSM), Tyler Palmer (D), and Adam Utter (A).”

NEXT UP: MaxLaxOC.com’s preseason No. 9…