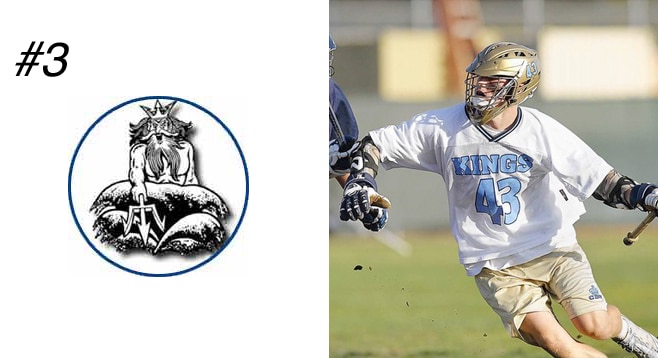 Number 3: The Corona del Mar Sea Kings are looking to reclaim what was theirs in 2012 and have the talent and coaching staff to be crowned CIF Champions in 2014.

The Sea Kings have a lot going for them this year and have proven themselves in the off-season as one of the teams to beat in 2014. They capped off a strong showing at Sandstorm by beating DH Lax in the High School Elite Division finals that had many JSerra players and even some standouts from top East Coast teams like Chaminade Prep and Georgetown Prep.  In that game they appeared extremely solid throughout and understood the game better than any other team.

Corona del Mar is solid at every position but will especially rely on their defense this year that will be led by brothers Hoyt and Hugh Crance (Notre Dame). Hoyt has learned from the best in G.W. who was a goalie himself and Coach of the Year at UPenn. Hoyt might be the best goalie in the league in terms of fundamentals and understanding of defensive mechanics. His brother, Hugh, plays exceptional takeaway defense and is the defense’s field general that constantly ensure’s there is no open man in the CdM defensive end. Brett Greenlee is arguably the most athletic defensemen in the county. The Sea Kings will utilize his speed and ability to adapt to hold down the middle of the field at LSM. Sophomore Jason Simaan has come out of nowhere as a face-off middie and gained national attention this offseason. Look for Simaan to win most battles at the face-off X.

Team offense is the name of the game for attackmen Max Kline and middies Ben Palitz and Sherwin Gersten. These guys are all equally skilled players that have bought into the system that Offensive Coordinator Jeremy Sieverts has put in place. The balance the CDM offense brings to the table will be especially fun to watch. This will be evident when the team has five to six different scorers a game.

As an Independent this year, CdM has a stacked schedule. Keep an eye on G.W.’s crew in 2014.