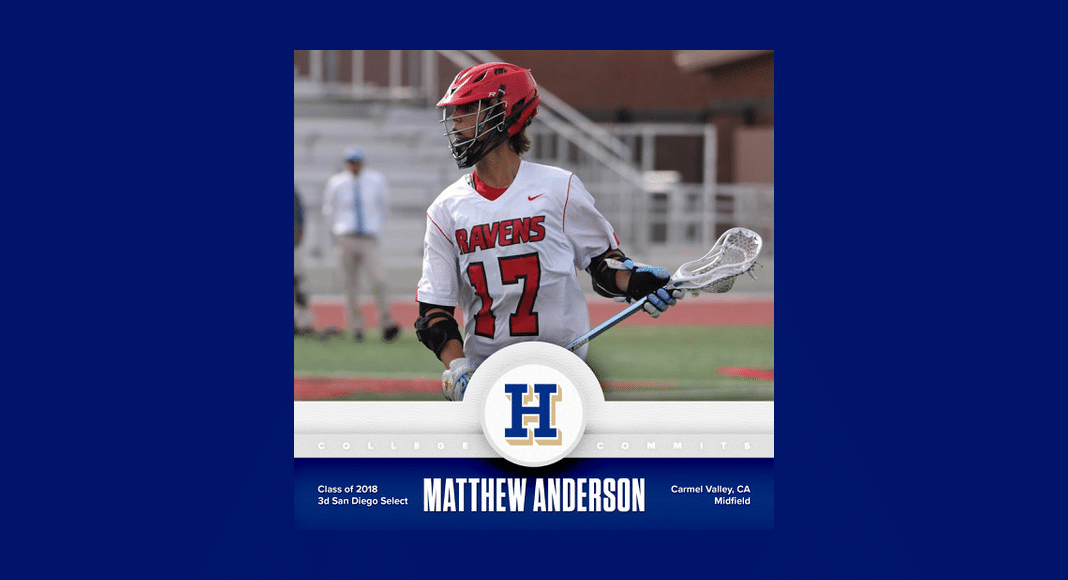 Anderson targeted academically-selective D3 schools and spent some time to explain the recruiting journey that led him to Hamilton.

What were some of the reasons that ultimately led you to decide on Hamilton?

From the beginning, I was looking for high academic institutions to play at, and Hamilton, among others, is a highly competitive academic environment which was a big pull. The Hamilton coach ultimately made me feel the most confident in my place at his school, other schools tended to treat me as if they were ready to lose me at any time. The confidence he gave me in his interest was a pull. Finally, after a visit I was able to see myself at the school, and with the coach’s explicit interest I really felt that I would be a valued player in the program.

What were some of the other schools you considered?

Towards the end of the process, it came down to Hamilton, Vassar, and Haverford; while earlier on it included schools such as Bowdoin and RPI.
Describe the recruiting process? Who helped you through and it how much of it was done on your own?

The recruiting process was interesting, and my number one consultant was my father. The process involved a lot of emails (A good portion of them being ignored) and phone calls with coaches. It was a lot of cat and mouse around a school’s interest, and ultimately the schools that lasted were the most honest. My dad helped advise all the emails and calls I needed to send out, and what to look for in what coaches said. From there, I handled most of the communication to schools I was interested in.

How have you developed as a player in the 3d Lacrosse system?
3d was essentially responsible for all the major growth that occurred in my play. My high school team wasn’t a powerhouse program with an organized off-season, so 3d helped elevate my game with high caliber players and coaching. From the box-field hybrid system to the 3d methodology for teaching fundamentals, I found that most my growth as a player and an athlete occurred in the offseason with 3d.  Our team was much stronger than my high school, and it put me in an environment to work my hardest in order to be an asset to the team.

How would you describe yourself as a player and how do you see yourself fitting into the program at Hamilton in a few years?
I’m a fundamental player who uses his talents to his advantage. I’m not necessarily one to sting corners on the dodge, but my size and power compensate. I score goals and survey the field by using my strength and vision to control the ball. At Hamilton, I will most likely fit in as an offensive dodger and outside shooter; I’m most effective downhill or in position for a step-down shot.  Though I’m not one to shy away from defense, and my size certainly comes as an asset to controlling the situation.

Now that you’re committed to Hamilton, what kind of goals have you set for yourself?
I have gone to the gym for the past 7 months since my commitment, and it is my goal to grow and build up more strength to aid my game. Also, I have given myself a tougher senior course-load to prepare myself for college-level classes, it is really important that I do well at the school. Finally, now that I’ve committed I want to try and push myself to be more creative in the upcoming spring season, and develop the talents that will transfer over into college.