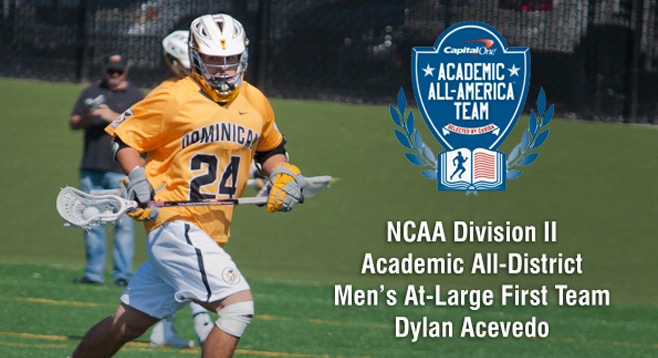 College Sports Information Directors of America (CoSIDA) announced earlier this week that Acevedo would be one of 11 student atheletes nominated in his region. The regions for which the students were selected are made up of eight geographical factions covering the entire United States.

Acevedo is a business administration major and was a key part in the Penguins’ back-to-back WILA (Western Intercollegiate Lacrosse Association) championships.

The Mater Dei alum started all 12 games for the Penguins. He won 122 of the 211 face-offs he competed in and his .578 winning percentage is currently 15th among all players in NCAA Division II. Acevedo scooped up a team-best 60 groundballs. His six points for the season (four goals and two assists) were best for the Penguin’s face off specialists. He was named All-WILA as defensive midfielder/faceoff specialist for the third year running and has been named to the First Team for the past two seasons. He was named the WILA Defensive Player of the Week twice this season.

Acevedo succeeded off the field as well, being named Dominican’s Male Junior Scholar-Athlete of the Year, awarded to the student-athlete with the highest GPA among his or her classmates.

Acevedo now advances to the Capital One Academic All-America® Team ballot, where first-, second-, and third-team All-America honorees will be selected later this month.