Mater Dei Wins the Battle of the Unbeatens 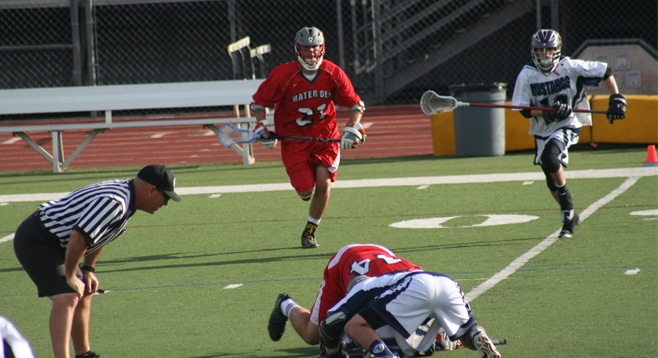 Both teams look to be much improved over last season and came into this meeting without a loss. Mater Dei had yet to be scored on this season and got off to another quick start.  The Mater Dei starting LSM, Bennett Brewer, took the ball on a clear and and found the turf at Mustang Stadium wide open on his way to the first goal of the game.  Harrison Evans who led the way for the Mustangs with three goals on the night, got the first goal for the home team, but Nick Southron brought the Monarchs right back and a lead at 2-1.  The game went back and forth, but Mater Dei never trailed during the game.
Nick Southron led all scorers with five goals on the night, including two on assists from his little brother, Jack Southron. Freshman goalie Jack Irvin gave up his first goal of the young season, but ended up with six saves on the night, including two big saves in the fourth quarter as the Mustangs tried to fight back and take a lead.  The Monarch defense is a very solid group and made it very difficult on the Trabuco offense.  Nick Bauer led the defense tonight with numerous take aways and some great one on one play.
Although Evans kept fighting back with constant pressure on the Mater Dei defense, they fell short tonight and lost 8-7 to the Monarchs.

Following a tough loss, Trabuco coach Johnny Rodriguez said, “My hat is off to coach Paddy Chester and his Monarch team. They are definitely one of the best defensive squads in the county. I’m proud of how hard we played tonight all the way to the final buzzer. Now we regroup and prepare to take on Aliso Niguel on Thursday.”