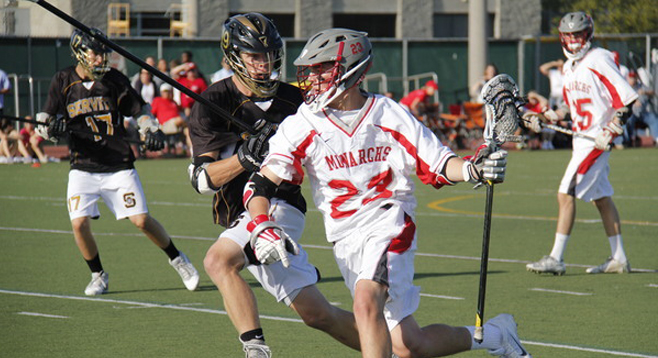 It was close to 90 degrees in Santa Ana Tuesday afternoon as Mater Dei (9-3) and Servite (2-8) squared off in their first battle of the season.The Monarchs came out as hot as the weather, scoring three goals in a span of less than 60 seconds and ending the first quarter with a lead of 6-1. Servite Head Coach, Tom O’Leary called a couple quick time outs which helped his team calm down and held the Monarchs scoreless in the second quarter. The teams went into the half with Mater Dei leading by a score of 6-2. Jack Southron led all players with three goals in the first half and ended the night with five goals and two assists. Servite kept themselves in the game thanks to Evan Purpura (2g) and Michael Seaman (1g) who each had a goal in the first half.

Coach Chester looked to have the better half time speech as Mater Dei stretched the lead to 8-2, thanks to a quick unassisted goal by Nick Southron and and then an outstanding play by senior defenseman Joey Cooper. After forcing a turnover and grabbing the ground ball, Joey raced down the field and passed up the shot with a sweet assist to Jack Southron who found himself open on the crease. Cooper continued to make a his presence known throughout the night, with multiple forced turnovers and 8 ground balls.

However, the determined Friar’s would not go down that easily, while looking for their first league win. Nick Prado (3g), who has carried much of the offensive load this season, found the back of the net as Servite was able to run off four unanswered goals and keep it a game at 8-6, early in the fourth quarter. But with each mini run by Servite, Mater Dei’s offensive leaders would answer the call and keep the game out of reach. Nick Southron is getting his legs back and ended the night with three goals, two assists and five GB’s, Caden Bevilacqua is also becoming a regular offensive contributor scoring two goals, including a hard fought, one handed, lefty shot. Senior, Jake Stanford has also been stepping up his game winning eight of his 12 face-offs and grabbing five ground balls.

Both teams will have the rest of the week off until their games on Saturday. Mater Dei will face Santa Margarita for their second time this season and Servite will be facing another top 20 team in Great Oak.

1. Jack Southron, MD: Although only a sophomore, Jack has continued to use his size and strength in beating his defenders game after game. He led all scorers with five goals, two assists and three ground balls.

2. Joey Cooper, MD : led all players with eight ground balls and always found himself in with key take-away’s and forcing the ball downfield. He also ended the night with one assist.

3. Nick Prado, Servite: Nick led all Servite players with three goals and kept his team in the game scoring three of the teams four unanswered goals going into the 4th quarter.