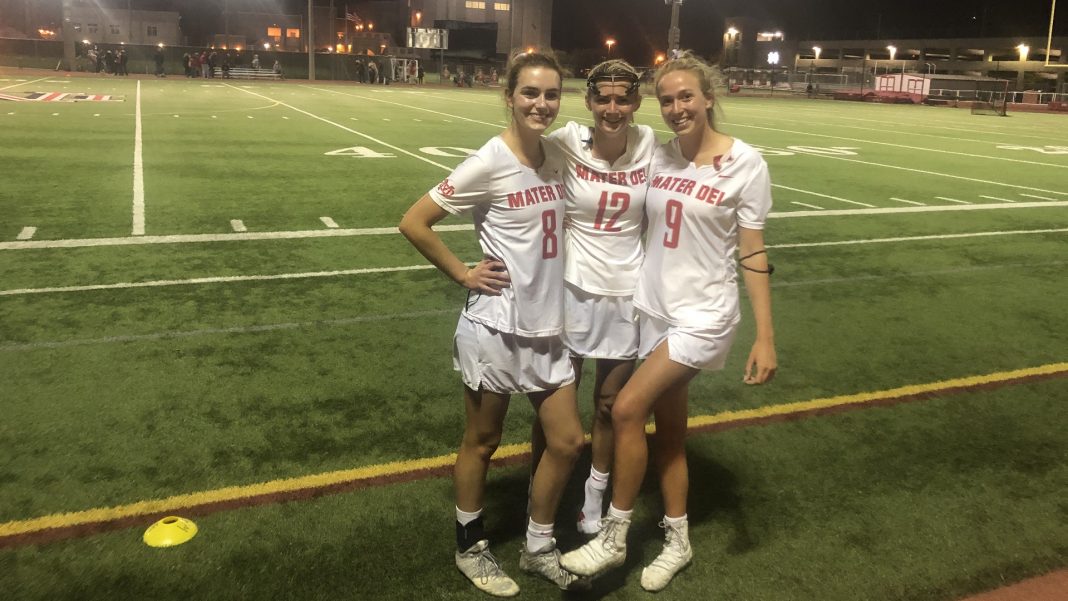 The No.2 Mater Dei girls lacrosse team closed out the regular season on an emphatic note, beating No.5 Palos Verdes 20-3 on Friday at Mater Dei High School.

“I think that the biggest thing that helped us tonight was that everyone was working together really well and it was a great cohesive team win. It didn’t matter who was on the field, we were playing Mater Dei lacrosse,” Monarchs coach Chloe Silance said.

From the opening draw control, the Monarchs were all business as they jumped out to a 5-0 lead at the 12:57 mark of the first half. The lead eventually got to 11-0 until the last five minutes of the half they suddenly hit a drought.

The Sea Queens didn’t get their first goal until Sparky Park got them on the board in the final three minutes of the half when there was still a running clock. They followed that up with their second goal courtesy of a free position goal from Harper Skeie in the final minute, making the score 11-2, which eventually became the halftime score.

Palos Verdes scored the first goal of the second half courtesy of Zoe Dearborn, cutting the lead down to 11-3, but it was unable to find the back of the net again, as Mater Dei was winning the draw control battle and dominating possession for the most part. The the Sea Queens’ credit, it didn’t fold as freshman goalie Grace Moore stood tall in the cage and made nine saves.

Both teams now turn its attention to the CIF-SS playoffs, as the brackets will be released today at 11 a.m. Deerborn thinks Palos Verdes (9-4), the second place team from the Bay League, is poised for a deep playoff run.

“We’re a very young team and we’ve done some great things this year. As far as how are we playing, I feel pretty good. Whoever we have, home or away, I feel great about what our team is doing,” Deerborn said.

Silance is also excited for the playoffs to start, as she hopes the Monarchs (15-3), the co-champions of the Trinity League, are just as excited as she is and are ready to work for the championship.

“I think that each game is needed to be taken very seriously. I don’t think that there’s going to be a lot of games that’s going to be a walk in the park and I think if teams are not expecting each game to go the way they will or prepare like they need to, then there could be some major upsets,” Silance said.