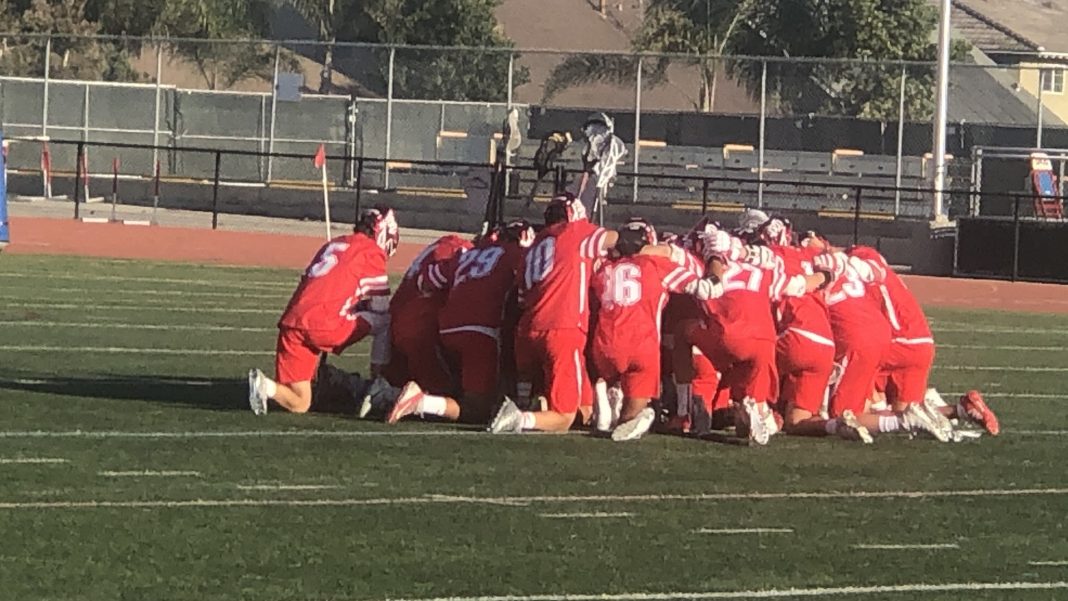 Once again the Monarchs took advantage of their full arsenal of offensive threats. Nine different Monarchs scored goals. Triston Jewell and Grant Portillo paced the team with four goals apiece. Nate Chu, Griffin Dwyer and Evan Curry each had two goals. Cole Crisostomo, Sean Sanchez and Rowan Piani each scored once for Mater Dei. Nick Colignon had four saves for the Monarch in a quiet night between the pipes.

“I feel like we really worked well together and we’ve been going hard during practice,” I feel like that’s what’s been getting us these big wins against big teams,” Portillo said.

Lucas De La Paz dominated the faceoff position, making it difficult for Los Al to get the ball. Mater Dei coach Johnny Rodriguez also gave credit to Tyler Curry, who had two takeaways and was a disruptive force on the defensive end.

“It definitely helps having Lucas De La Paz as our faceoff kid, just getting possession after possession for us. We Know if we stick in the back of the net, we’re going to have another possession right behind that,” Jewell said.

The Griffins broke the Monarchs’ shutout in the third quarter, as Drew Anderson won the ensuing faceoff and took the ball coast-to-coast for a goal, which had the Griffins’ bench and fans cheering.

Ed Shean led Los Alamitos with two goals while Anderson and Sean Park each found the back of the net once. Trevor Partlow made seven saves for the Griffins.

“I think despite our team losing, we really played to the last whistle and we really turned it around in the second half,” Griffins coach Matt Cunniffe said. “Drew Anderson, Ed Shean and Our defense really stepped up in the second half and those are the things we can improve on.”

Mater Dei (5-0) doesn’t have any more games this week, but has a big at Loyola next Thursday at 7:30 p.m. Portillo said that his team will need to do all the things it did in this game and not have any individual play from any players.

“We need to grind the rest of this week, get our minds right and just come out flying like we always do,” Jewell said.

Los Alamitos (1-2) returns to action Friday at home against Yorba Linda at 7 p.m. Cunniffe said the Griffins will look to make the proper adjustments and keep a positive attitude going forward.

“Next game, we just have to look in ourselves, fix what we can fix and control what we control. But most importantly, work on the faceoffs, stay out of the box and really being positive and learning a lesson from this,” Cunniffe said.

Previous articleSt Margaret’s turns up the tempo in 2nd half and rolls vs Santa Fe
Next articleGold Coast Invitational Pivots Due To State Rules
MaxLaxAll Lacrosse. All the Time.
Southern Section Boys