Mater Dei Named “Most Improved Team of the Year” 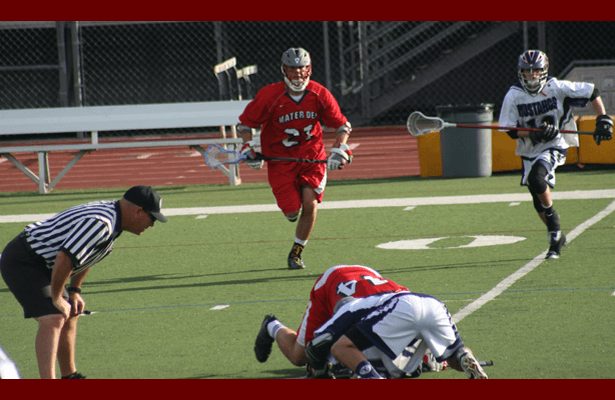 MaxLaxOC.com named Mater Dei boys varsity lacrosse as the “Most Improved Team of the Year,” following the Monarch’s rebound from a 3-12 season in 2013 to an 11-7 campaign and a playoff berth under first-year coach Paddy Chester in 2014.   MaxLaxOC.com caught up with Coach Chester to find out how he and his staff were able to make such a profound impact so quickly:

MaxLaxOC.com: Mater Dei is a proud sports institution. How did you get your boys to buy into your system so quickly?

Paddy Chester: Mater Dei has a long and strong history of sporting prowess among numerous sports. I arrived at Mater Dei with that in the front of my mind. Lacrosse needed to be a part of that history and success. As this as one of my long-term goals, I was able to present to the players where we were going and what is what going to take hard work , commitment. But the rewards were to be a part of writing the prologue to the Mater Dei lacrosse story . Who wouldn’t want to be a part of that? This is a great school both academically and athletically, so we have to be and will be part of that success and growth .
I kept things simple but was honest with them all — my expectations and goals along with what it will take. This is just the start of a major rebuild and I am pleased as to where we are right now. Still a way to go though!

MLOC: What is your coaching philosophy?

Coach Chester: Hard work, hard work and hard work bring rewards, success and get things done. Lacrosse is really a simple game. Catch, throw, ground ball and run. These fundamentals are vital but need to be done correctly. By focusing on this things can happen and the game can be played. Give everything you have and you will see what you get back. And, of course, have fun playing the greatest game there is.
We have driven our program on three levels: Pride, Passion, Belief. Pride in our school, the game of lacrosse and each other. Passion in the game and play always with that in mind. Play as lacrosse is what is running through your veins and if it is your last game. Just leave it out there on the field, all of it. Belief in your teammates and coaches and of course your talents and that anything can be possible.
MLOC: Was there a single game this year where you and the boys realized this year was going to be different?

Coach Chester: I think that our first home game was a major game for us. A close game against a well-organized, talented El Toro squad. We had to fight and managed a win in OT. This brought the team together and made a huge impact in this program. We had a great start to the season using this game as a changer.

MLOC: You rebuilt your coaching staff from scratch. Tell us about them and your backgrounds.

Coach Chester: I was incredibly fortunate to have two very good and experienced coaches working with me. Ray Ralph came on board with me this year to join Ryan Kelaher who was starting his second year with the program me. Having Ryan here helped tremendously with the fact that the boys had someone they knew and trusted. Coach Ralph is a legend who coached at Foothill from 2007-2012 with Coach Jon Fox. (see below for more on all three coaches).

MLOC: Who were the key leaders on this team that led the turnaround?

Coach Chester: We had a number of key players, but for me the whole team were important from buy-in to commitment to trust the coaching staff and work hard to achieve what we need to get done. Offensive play was driven by Nick Southron with the midfield work horse of Caden Bevilacqua being a big part. Defensively I had a very tight and talented unit driven by Nick Bauer at the back and Bennett Brewer at LSM plus solid continuous play from Jake Stanford.
I cannot praise the boys enough for reaching the goals set up they should be very proud of what they accomplished and the standard that has now been set for Mater Dei Lacrosse.

MORE ABOUT THE COACHES:

Patrick “Paddy” Chester grew up in Manchester, England. He first watched lacrosse in England when the World Championships were played there in 1978 and fell in awe with the game. Coach Chester started playing lacrosse in high school where he was a natural and recognized throughout his youth and high school career as a top midfield player. Paddy continued playing lacrosse at Sheffield University and Sheffield Steelers playing in Division 1 for almost 20 years. He was a member of the England Men’s Lacrosse Squad from 1987-98. Paddy was selected on the English Lacrosse “Team of the Year” in 1995-96 and voted as MVP by English Lacrosse in 1992-93.

Paddy brings to Mater Dei High School lacrosse a long coaching career as well. He coached England’s U19 team where they entered the World Series in Japan 1996 and Australia 1999. Coach Chester moved on to being Assistant Coach for the England Men’s National Team, winning the European Championships in 2000 and 2002. Since arriving in the US, Paddy coached at San Clemente High school for two seasons and one year at St Margaret’s High School. Coach Chester also coaches with Victory Lacrosse at all age levels as well as West Coast FCA lacrosse.

Coach Ralph grew up in Long Island, NY, where he began playing lacrosse with his brothers and friends as a 6 year old. Since there were no organized teams at the grade school level, Coach Ralph didn’t begin to play organized lacrosse until he was in ninth grade. Even though his high school team was a start up team, with only two “experienced” players, they went on to win the division title. His high school team had a 21-1 record and went to the county championship game in 1971. Coach Ralph went on to play at Nassau Community College, where they were became National Champions in 1972 with 33-0 record.
After college, Ray played club lacrosse for Long Island Athletic Club, national champions, and was selected to club all stars. Coach Ralph moved to California upon joining the Marine Corps where he tested USMC F-4 Phantom jet engines. During that time he played and coached for Orange County Lacrosse Club, who were CA State Lacrosse Champs for eight years during the 1980’s where as a team they went on to beat the Canadian National Team. In 1980 Coach Ralph played in the “Nations World Games” played in British Columbia Canada for the United States National Indoor (Box) Lacrosse Team. Ray coached lacrosse at UCI 1990-1994, where his team won the WCll Championships in 1994. Between 2007 and 2012, Ray coached at Foothill High School and assisted at Hewes Middle School. During his tenure, Foothill took home two State Championships and the 2007 CIF championship.
Coach Ralph loves to coach because he loves the enthusiasm, spirit, and intellect of young athletes.   Ray has been married for 30 years and has two children, Ryan and Kelly and two beautiful grandkids.

Coach Ryan Kelaher played for Ward Melville High School in New York and graduated in 2001. He was a member of two New York State Championship teams (1999 & 2000). Through his play he earned All-Division/All-County defender honors on numerous years and US All American honors as a senior. In 2000, he was a starter on Long Island’s Empire State Team. In 2001, coach Kelaher was selected to participate in the STX National All American game where he won Defensive Player of the game honors.

In 2001, Inside Lacrosse honored Ryan along with three others with Blue Chip recruit status. After two years of playing at Loyola University in Maryland, coach Kelaher transferred back home to Hofstra University. Ryan helped anchor the Pride’s defense which earned them the second best defense in the nation in 2006. That year the Pride was able to hold a ranking of #2 in NCAA Division I standings. His tenure at Hofstra allowed him to earn All-Colonial Conference Team awards in 2006 along with the Hofstra Pride reaching the NCAA Quarterfinals appearance.

Major League Lacrosse’s Long Island Lizards signed coach Kelaher to a contract in 2008. Soon after, he decided to enter the teaching and coaching profession. Shortly following his stint as a defensive assistant at Ward Melville in the spring 2010, coach Kelaher came out to California and assisted the Whittier College Poets lacrosse team 2010-2012. Through his guidance the Poets defense was ranked in the Top 15 in Goals against Average. In 2012, the entire coaching staff helped guide the Poets to earn a NCAA III Top 25 ranking.

Currently, coach Kelaher is on staff at Mater Dei in both the History and Athletic Departments. Coach Kelaher assists with the daily operations of the Mater Dei Boy’s Lacrosse team and works primarily with the defensive unit. Outside of his duties as an educator and coach, coach Kelaher enjoys playing golf and enjoying the California atmosphere.