Mater Dei Has no Problems Against Corona Del Mar 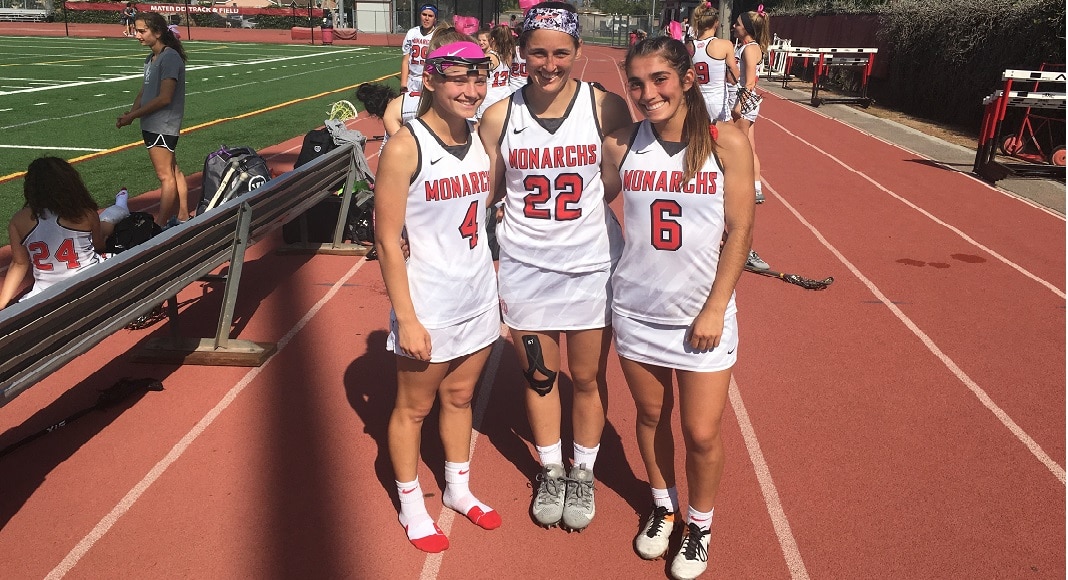 The Mater Dei girls lacrosse team closed out its week with a 15-4 win over Corona Del Mar on Friday in a hot, humid and breezy game at Mater Dei High School.

From the opening draw, the Monarchs didn’t have too much trouble, as they opened a 4-0 lead over the visiting team. The Sea Queens didn’t get their first goal of the game until the 7:22 mark of the first half. But after that goal, the Monarchs took firm control, as they scored five straight goals to take a 9-1 halftime lead and never look back.

“I think we played like a team. We were able to get everybody in and I think everyone did a good job of fulfilling their roles,” Mater Dei coach Cressita Bowman said.

“Lily’s an awesome kid. She’s got a happy go-lucky attitude, and she just had a really good half,” Bowman said.

For the Sea Queens, Caroline Brewster had two goals while Joslyn Simaan and Emily Faludy scored one apiece. Junior goalie Katie Langley made six saves for the Sea Queens, who was without Ashley Olson, as she was on a mission trip in South Africa.

“In terms of draw controls and possession, we did a really good job and we didn’t turn it over very much,” Sea Queens coach Aly Simons said.

The Monarchs have two big road games next week, against Cathedral Catholic of San Diego on Tuesday at 5:30 p.m. and No.2 Foothill on Thursday at 3:30 p.m. The game against Foothill will be crucial for purposes of potential playoff seeding.

“Draw controls and composure,” Bowman said in regards to what her team has to do in order to beat either team. “They [Foothill] always give us a pretty good matchup, so we’re looking forward to some good competition,” Bowman said.

For the Sea Queens, while they are on spring break, they have four games lined up. One of which is against University at home on Monday at 3:15 p.m. The Sea Queens have beaten the Trojans once, in a 10-9 win at University, but will have to win the second time without Olson.

“I’m confident we can [win], we just got to show up. It’s our spring break, so we got to show up ready to play and make next week all about lacrosse,” Simons said.

CdM will be on the road against Northwood on Wednesday at 4 p.m., Torrey Pines on Thursday at 7 p.m. and Poway on Friday at 5:30 p.m.