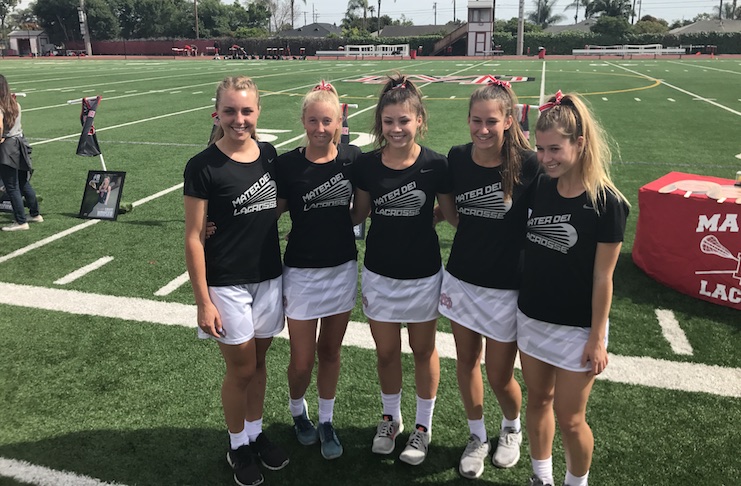 The Mater Dei girls lacrosse team finished the season with a big win (19-4) against Oak Park on Senior Night. The Monarchs five seniors were recognized before the game with photos, flowers, and homemade cards and signs from their teammates. Family and friends were treated to a spectacular final regular season game as the Monarchs ran away with this one.

The Monarchs were at full strength with the return of Kenzie Wallevand from a knee ailment that kept her sidelined for the last three weeks. She looked better then ever as she traversed the field. Madeline Hooks, Grace Houser, and Lauren Gonzales along with Wallevand led the potent offense for most of the night while junior, Sydney Payne, got her first hat trick.

Mater Dei had a strong showing on defense as well. Holding Oak Park who has been averaging almost 12 points per game to 4 points. Courtney Walburger has done a spectacular job all year in the cage (only allowing 4.4 goals per game against her by Orange County teams). She came up big against Oak Park when her team needed her.

Mater Dei will now focus on defending their O.C. and Southern Section championships. They will start by hosting a team Tuesday May 2. The Monarchs will try to become only the second team from the OC to achieve back to back championships.