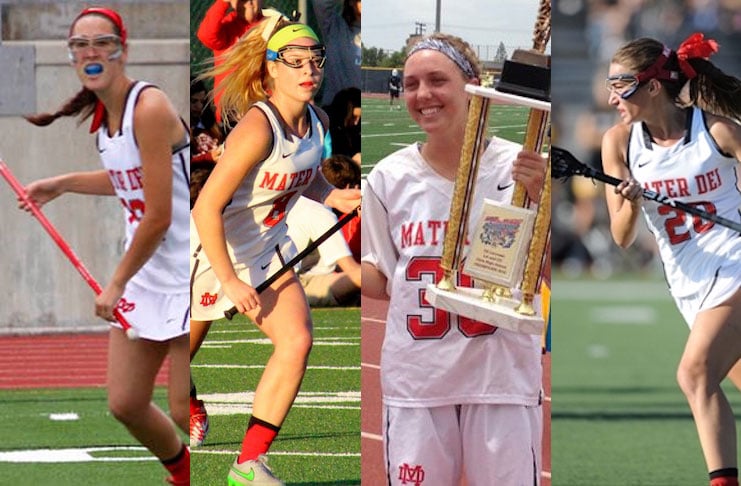 Head Coach Cressita Bowman announced that Grace Houser, Sydney Payne, Courtney Walburger, and Mackenzie Wallevand have been selected to captain the Mater Dei girls’ lacrosse team in 2017.  The four veterans will lead the Monarchs in pursuit of a second consecutive Southern Section championship.  Mater Dei finished 2017 with a perfect 21-0 record.

Houser, a senior midfielder, will continue her lacrosse career at the University of California Berkeley in the fall.  She is a three-time First Team All-County selection, a 2016 All American, 2015 Team MVP, 2014 Offensive Team MVP, and 2014 First Team Trinity All-League selection.

Wallevand, another senior midfielder, is committed to play for Fresno State after graduation.  She had a breakout season in 2016 in which she earned the following honors: All-American, First Team All-County, Team MVP, Player of the Southern Section Championship game, and  Orange County Register Player of the Week.  Wallevand was named Second Team All-County First Team in 2015 and First Team Trinity All-League in 2014.

Wallburger, a senior goalie, will join Wallevand at Fresno State.  She has won the Monarch’s Most Improved Player Award for two consecutive years and was the 2016 Player of the OC Championship game.

Payne is the only junior captain.  She has verbally committed to play at Arizona State after she graduates in 2018.  Payne splits her time between midfield and defense.  She was the Monarchs’ Defensive MVP last season and the Team Rookie of the Year in 2015.