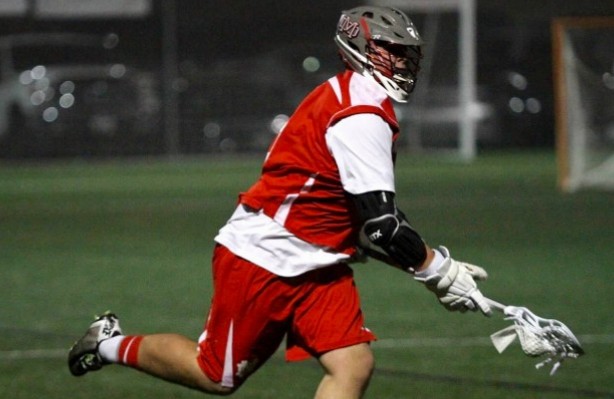 On a cold and rainy night in Norco, the home team came out strong and ready to play.  Cole Miller (4g, 1a) won four out of the five first quarter face offs, pushed the ball up field and scored three of his team high 4 goals for the night.  Norco continued their scoring spree into the beginning of the second quarter with goals by Dante Duran (2g, 2a) and Colton Dall (2g) before Mater Dei warmed up and made it a game.  Down 5-1 and on the verge of watching the game get out of control, Mater Dei started possessing the ball and turning momentum in their favor.  Four straight goals by Jack Southron (University of Arizona), Nick Sando, Jack Irvin and Brady Burwell  tied the score at 5-5 with only 1:02 left in the first half.

Despite being a first year CIF program, the Cougars showed that they would not be intimated and counter punched with two goals in the final minute of the half to gain a 7-5 advantage at the intermission.  Norco kept it going after half time up and quickly built their lead to 9-5, beforethe half time adjustments made by coaches Johnny Rodriguez and Grant Kaleikau started paying off. Nick Bauer (Princeton) and Will Yeager started winning face offs and disrupting the Norco offense.   The offense was fueled by the aggressive defense and went on a 9-2 run over the last quarter and a half to secure the 14-11 victory for the Monarchs.

Both teams are now 2-2.  Mater Dei faces Dana Hills on Thursday night.   Norco will face off with Damien on Wednesday night.