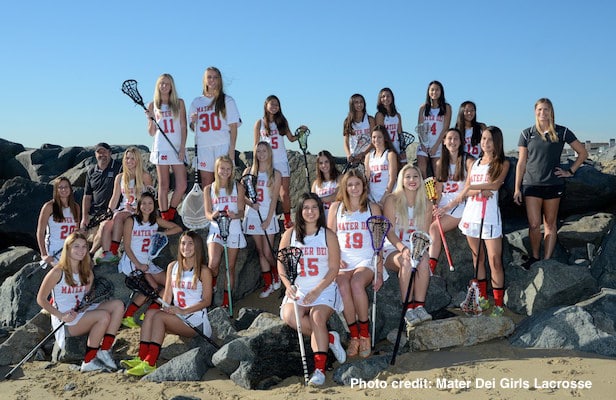 No. 1 Mater Dei girls’ lacrosse defeated No. 4 Corona del Mar 12-7 on Saturday to advance to the County finals for the first time in program history.  Grace Houser’s domination on draw controls gave the Monarchs a comfortable possession advantage, and their well-oiled offensive machine, led by  Mackenzie Wallevand’s  eight points  (6g, 2a), made the most of it.

The Sea Kings closed in on Mater Dei several time throughout the game, but each time Mater Dei had an answer.  Midway though the first half CdM closed the gap to 4-3 on goals from Kennedy McGinnis and Paige Nelson, and the momentum was starting to switch in their favor. Wallevand answered quickly on behalf of the Monarchs though, intercepting a clearing pass on the ensuing, finding the back of the net to give her team some breathing room.  Wallevand then closed the half with two more unanswered goals to make it 7-3, Mater Dei, at the intermission.

CdM appeared ready to make another push when Nelson opened the second half scoring on a nice roll dodge on the crease to make it 7-4.  Once again, Mater Dei responded swiftly as Maddie Hooks put away a pass from Houser off the ensuing draw.  Hooks’ goal catalyzed a three-goal Mater Dei run that essentially put the game out of reach for the Sea Kings.