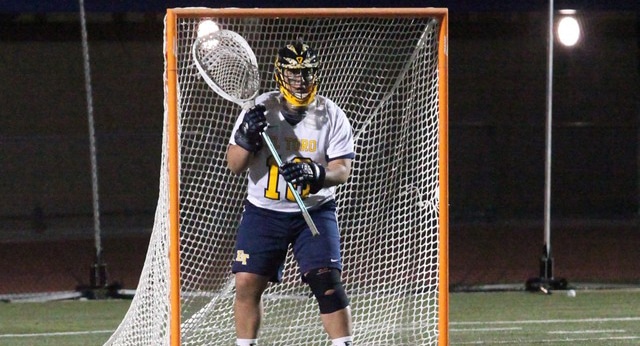 Mater Dei’s first home game of the season got off to a fast start with senior attack Max Schneider scoring an unassisted goal and taking a high shot to the head, that resulted in an that rendered him unconscious.Schneider was taken to the hospital and released after tests showed he had suffered a concussion. He is resting at home today and we all wish him a rapid recovery. Play resumed after a minute break in the action with the Chargers man-down for the full count of 3:00 non-releasable.The Monarchs were able to take advantage of the 3:00 penalty and score 2 more goals – the first by freshman Nick Sando and the second by Nick Southron, to take a 3-0 lead half way through the first quarter. Things settled down and and El Toro was able to control the ball with a long possession which ended in Aaron Ball’s first of his 2 goals on the night and a 3-1 lead for Mater Dei at the end of the first quarter.

The second quarter belonged to El Toro as they controlled the face offs and played some great team defense shutting down two more man up opportunities for Mater Dei. Danny Fischer got his first of 3 goals on the night and Clay Gilmour scored to tie the game at 3–3 going into half time.

El Toro continued their push at the start of the 3rd quarter and took their first lead of the night with Fischer’s second goal and a 4-3 lead for El Toro. The game was a bit sloppy in the third as both defenses forced multiple turnovers and El Toro’s goalie, Brett Baldizon stepped up his game with 11 saves on the night, most of which came during the second half and 3 in overtime. Mater Dei fought back and scored the next 3 goals, one of which was on another man-up opportunity after a hard hit resulted in a 2 minute penalty. The first goal was by Jack Simonis, Nick Southron got his second of the night, and Jack Southron scored the first of his 2 goals on the evening and a 6-4 lead. El Toro quickly capitalized on another turnover by Mater Dei and a man down goal right before the end of the 3rd with Mater Dei up by a score of 6-5.

After a chippy 3 quarters, both offenses settled down and played good ball control offense. The fourth quarter highlight for Mater Dei was Jack Southron’s (2 G, 1 A) feed to his brother cutting to the goal and Nick’s (3 goals) finish with a well placed behind the back shot and a 7-5 lead.

Once again, El Toro would not be denied. Despite a strong defensive effort by Mater Dei, Ball (2 goals) and Fischer (3 goals) both scored, the last goal by Fischer tying the game with :22 seconds left in the game. El Toro headed into the over time for the third time this season and having won in over time on both the previous occasions.

But it was not to be on this night. The defensive play for Mater Dei has been the strength of the team during this young season. Nick Bauer, Joey Cooper and Bennett Brewer all played exceptionally well and challenged El Toro on every possession and clear and the Chargers were not able to get a shot off during the almost 4 minute over time. With 30 seconds left in the game and Baldizon looking to clear the ball for one last effort, Nick Southron played some aggressive defense on the goalie and forced a bad pass that was recovered by Jack Southron who scored the game winning goal with :19 seconds left in the first OT.

1. Brett Baldizon. The El Toro goalie played gallantly. He had 11 saves on the night including 3 in OT.

2. Nick Southron. It was just another ho hum 3 goals, 5 ground balls night at the office for the big middie.

3. Max Schneider/strong> – Once again best wishes to Max for a full and speedy recovery.