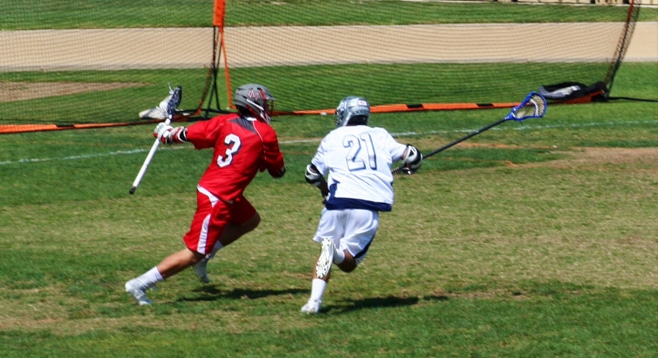 Coach Paddy Chester’s Monarchs jumped out to an early lead scoring twice in the first three minutes of the game.  These two goals were made by the duo of Nick (8G, 2A) and Jack Southron (3G, 2A) who would prove unstoppable by the end of the day.  Newport responded quickly with three goals made respectively by John Mooers (2G) who grabbed two and Kole Escher (3G) who scored the go ahead goal.  The Southron brothers responded just before the end of the first quarter with a game tying goal by Nick with an assist by brother Jack.  The second quarter opened with two quick goals by Newport with one each by Derrick Lopez and Alex Fuller (2G, 3A).  Again Mater Dei came back to tie it up with goals by Nick and Jack Southron with both men getting an assist.  Meanwhile Newport Middie Nathan Chaness (1G) won 7 of 11 faceoffs which was key in keeping Newport in the game.  The half ended with Chris Buchannan from Newport scoring a go ahead goal before the whistle.

Mater Dei kept the game close into the fourth quarter with more goals by the Southron brothers and a one by Adam Soto.  The Sailors went ahead by 2 goals late in the 4th on goals by Chaness and 2 by Escher who ended the day with 3 goals, but the Sailors could not find an answer for Nick Southron who scored 2 more goals with under 2 minutes left to play.   Both teams ended regulation play all even at 11 to 11.  Solid defense by Mater Dei’s Bennet Brewer with 4 ground balls, Joey Cooper, Eric Parra and Gavin Ryan Massa forced Newport to take their shots from the outside as the defense held strong in the zone while Caden Bevilacqua (1A) won 5 of 6 face offs in the 4th quarter.

Fast forward to overtime and only :48 seconds in, Nick Southron broke through with the unassisted game winner, ending the day with 8 goals and 2 assists. Mater Dei’s season has started strong thanks to solid performances in goal by freshman Jack Irvin who made seven saves in the game and a vastly improved defense.  The Sailors top point getter for the day was Alex Fuller with 5 points (2G, 3A).  Coach Chester added, “I am very proud and pleased with the boys . I see a group of young men who have decided to never give up.  They have come together and keep playing  until the final whistle:”   Final score: Newport Harbor 11, Mater Dei 12.