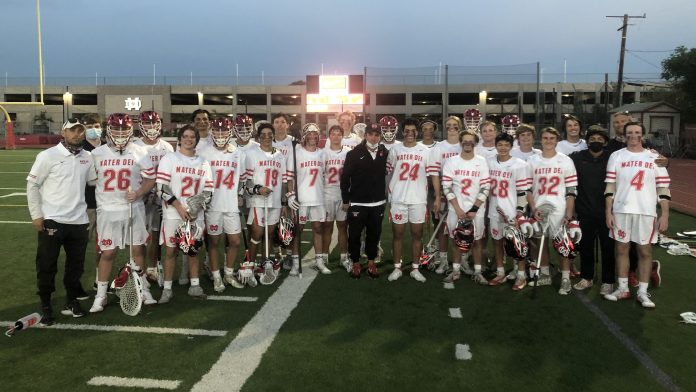 “I thought the boys played great on defense. We certainly hustled hard and got in front of the ground balls early. Fortunately for us we were able to execute early in the first quarter,” Monarchs coach Johnny Rodriguez said.

The Monarchs’ scoring was balanced, as Ryan Stiller and Cole Crisostomo each had two goals while Tristan Jewell, Evan Curry, Lucas de la Paz, Nate Chu, Tommy Bethel, Grant Portillo and Kyle Waterman each found the back of the net once. Nick Colignon made nine saves for Mater Dei.

The Monarchs never trailed in the game, as they set the tone in the first quarter, taking a 4-0 lead. The lead ballooned to a 5-0 lead early in the second quarter until the Sailors got on the board courtesy of Aidan Brutman at the 8:10 mark.

It looked as if Newport Harbor had their offensive rhythm going when Logan Atkins netted the Sailors’ second straight goal almost two minutes after Brutman’s. But Crisostomo dashed those hopes when his second goal put Mater Dei up 6-2 late in the quarter, which wound up being the halftime score.

The Monarchs wasted no time scoring to the third quarter, as de la Paz scored nine seconds in. After Owen Brosnan scored for the Sailors at the 10:35 mark, they were unable to score again, as Mater Dei’s defensive intensity made it difficult to muster up anything.

“Our main focus is that we come out prepared, mentally, physically and emotionally. I thought we did that early,” Rodriguez said.

Jerome Snyder made 14 saves during his very busy night for Newport Harbor. Despite the loss, Sailors coach David Todd was impressed with this team’s defense, which at one point prevented a six on three goal when they were three players due to penalty.

“Jerome Snyder played off his head,” Todd said “We got a wake-up call. They [Mater Dei] did a wonderful job, they got some really good players on that team. We got some work to do. It’ll come.”

Both teams return to action on Saturday. The Monarchs (2-0) travel to face San Clemente at 1 p.m. while the Sailors (1-1) return home to face Chaparral at 5 p.m.