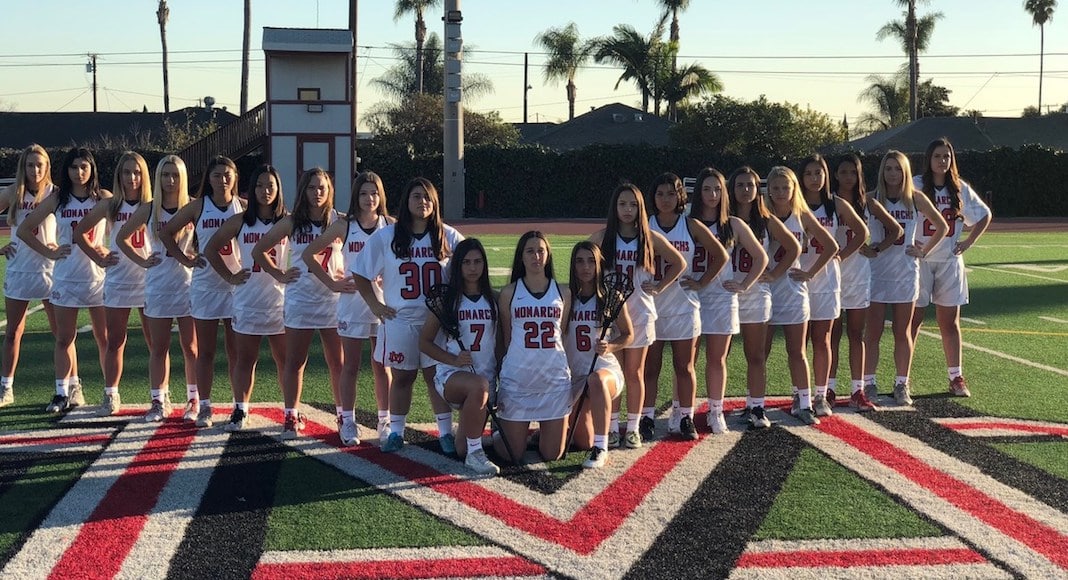 Thursday’s #2 vs. #3 game started even and physical, but ended lopsided and physical, as slight underdog Mater Dei went on a 8-1 run to end the first half and never looked back, en route to a final a 14-6 score.

To open, each team took a long possession, but each defense stood strong, denying any real opportunities.  On Foothill’s second set, after working the ball around, junior Ava Brand received a pass on the cut up from behind the crease, worked her way around strong 1-v-1 defense, and shot just around the defender, off-stick high for the 1-0 lead.  Minutes later, junior teammate Brooke Williams drove, earned a free position, and buried the low shot to give her home Knights a two-goal lead.

After winning the following draw, Mater Dei came back with junior Tess Keiser netting a free position on the sidearm lefty shot.  They almost tied it on the fast break off the ensuing draw, but senior Sydney Payne found the pipe after beating the Foothill goalie, senior Becca Nailon.

During the possession, Foothill senior Lauren Kilger took a yellow card and though her team earned a turnover and clear, a viper-strike check from Monarch senior Hailee Andry forced a turnover.  Andry passed through pressure on the clear to senior Angelina Larres, who marched it into the Foothill zone and found junior Peyton Smith cutting hard for the quick feed and finish.  Foothill killed the rest of the penalty, but then got called for two more, consecutively.

Mater Dei took advantage with three goals before the teams were even strength again.  The first came from Keiser, who took a free position feed from senior Sydney Payne.  The second came from junior Gianna Danese who scored on an empty cage in an unsettled turnover play.   The last was from junior Anna Rolfes on a nimble drive from the wing and low shot.

Foothill’s Williams would have scored the rare two-man-down goal, but her team was offside and the ball went back to the Monarchs.  Still, she made a “regular” man-down goal after breaking a double team and driving up and under for the dunk.  Mater Dei’s Smith answered in the next possession with a smooth drive and sidearm shot.

The rest of the half was all Monarch, with Kaiser scoring one in transition and one off a nice feed from Smith on the third cut—and sophomore Georgia Glowaki scoring her first from a strong crease roll.

Foothill opened exactly how they would want, with a goal from Williams on a quick drive and hard, low shot.  But Mater Dei answered on the next possession when Smith drove left to right and fed Danese who was cutting back right to left and finished with authority.

Williams came back with another strong drive, shot and goal.  And a few possessions later, she duplicated her effort to bring the home team to within four, 9-5.  But, just as before, Monarchs extended their lead as they held Foothill scoreless in the final 9:30 of the game.

Beyond this short stint at four goals, the gap never really narrowed.  Although the second half didn’t produce a terribly close game, each team was playing tough, hard-nosed lacrosse.  Mater Dei goalie Lily Molkara came up with a number of beautiful saves to keep her team comfortably ahead, and Foothill goalie Becca Nailon answered with a few of her own.  On multiple plays, athletes ended up on the ground as both teams gave up their bodies for the cause.  The hip jams were delivered with a little extra punch, and the contact was just a bit sharper than it is on a typical day at the office.  Yet, despite the rivalry, the history, and the physicality, fans regularly saw players from opposing teams picking each other up and clinking sticks.

In the final stages of the game as Mater Dei pulled away, Smith scored an unsettled drive to cage, Keiser pocketed one during the semi-stall, Glowaki scored off a feed from Smith, and freshman Tallulah Reher added one of her off from a late free position.  On the final play of the game, Molkara made a wicked save to put the eight-goal victory on ice.