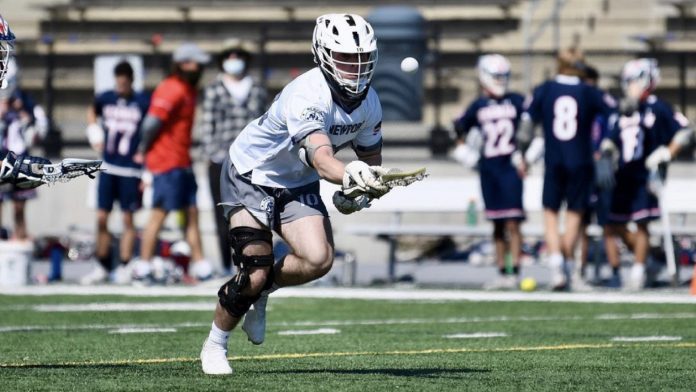 Newport Harbor senior faceoff specialist Mason Williams announced on Tuesday that he has committed to study and play Division 1 lacrosse for Cleveland State.

“What made me commit to Cleveland state is the fact that after I talked to coach [Andy] German and the rest of the coaching staff they really made me feel like I belong and saw me as someone as more than an athlete as well as their numerous events to give back to their community which I thought was really cool and something I would like to be a part of,” Williams said.

Williams also added that that one of the main reasons he committed to Cleveland State is because they emphasize mental health. He found out the importance of mental health after he tore his ACL his junior year.

“They [Cleveland State] also had a very big emphasis on mental health which I found important being that after I tore my ACL my junior year. My mind was really going through the ringer and it still is every so often,” Williams said.

Williams was a big part of the Sailors’ season this year, which saw them make the CIF-SS Division 1 playoffs and win a playoff game under first-year head coach David Todd.

“He has drive that equals college players, the drive to get better every day. He’s been honing in that faceoff craft since he’s been in eighth grade. He won one faceoff back in eighth grade and he got addicted to it and he’s just honed it in ever since,” Todd said.

Williams said he’s honored to play lacrosse at the Division 1 level despite his ACL injury during his junior year.

“It is a big honor that I am able to play at the highest level and I am glad I am able to get an opportunity like this after I tore my ACL and meniscus and got reconstructive knee surgery during the biggest year for recruiting,” Williams said.

This year, Cleveland State went 3-7 and 2-5 in the previous year before the pandemic cancelled the entire NCAA men’s lacrosse season.