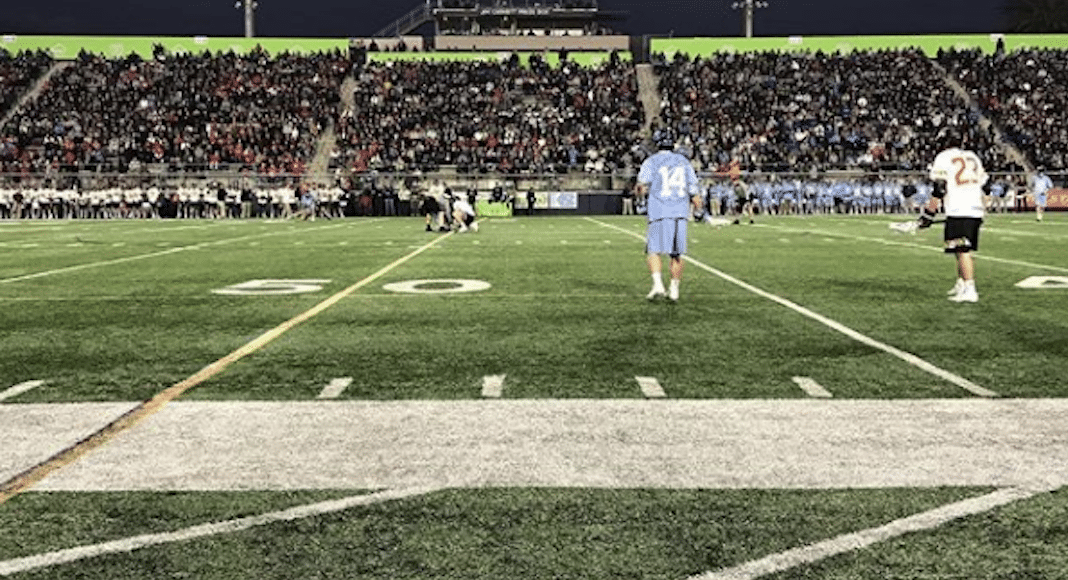 Costa Mesa – Oops! They did it again.  Event coordinator GW Mix and two of the top teams in college lacrosse teamed up to put on another spectacular Pacific Coast Shootout.  Now in its fifth year, the PCS has become a must-see lacrosse event drawing national media attention and a packed stadium.

Mix does his part by putting on an event that feels like a major college bowl game.  From the pre-game tailgates to the media buzz on the sidelines to the nearly 7,000 lacrosse fans energizing the intimate confines of Le Bard Stadium, the buzz is electric.  The PCS allows fans to get up close and personal to a major sporting event like no other.  It’s like watching Bruce Springsteen and the E Street Band play in a high school stadium.

Late last night, @TerpsMLax showed the West Coast what they’re all about, beating @UNCMensLacrosse in front of 6,970 fans. 📷 & 🖋 @Dan_Aburn https://t.co/U56AaDsA9s

And the teams did their part by putting on the show their second PCS meeting.  Maryland topped North Carolina 10-8 in the 2015 Shootout.

The Pacific Coast Shootout always seems to have some drama no matter who plays. PCS 1 featured Foothill alum Erik Adamson scoring six goals to lead Denver past Notre Dame.  Last year it was the University of Virginia rallying back from a six-goal deficit to beat Cornell in overtime. And this year it was Maryland fighting off a furious North Carolina comeback after the Tar Heels were seemingly left for dead.

The Terps were in control for most of the game and went into halftime with a 5-2 lead.  Their dominance continued into the third quarter and when Coronado High School alum Anthony Demaio extended the Maryland lead to 8-2 midway through Q3, it felt like it was game over.

The California native Anthony DeMaio puts the Terps up, 8-2!

However, the Tar Heels did revitalize and went on a 5-1 run to make it 9-7 with just under five minutes to play. A delay of game penalty gave the Tar Heels the ball and an EMO with plenty of time,  but they turned it over on an unforced error and defenseman Bryce Young of Maryland went coast-to-coast and finished with a lefty long pole shot to put the Terrapins up 10-7. The Terrapins eventually iced the game thanks to a Logan Wisnaukas goal two minutes after Young’s goal.

BRYCE YOUNG WITH A MASSIVE GOAL!!!

“Credit to our defense. They did such a great job down there. We had a couple penalties, but our man down crew has done an awesome job all year, and we knew they were going to have a big run at one point of the game,” Connor Kelly said.

Kelly led the Terrapins with four goals while Jared Bernhardt added three goals of his own. Adam DeMillow and Anthony DeMaio (Coronado High School) added one goal apiece for Maryland, which got seven saves from Dan Morris. Justin Shockey won 16 of 20 faceoffs and scooped up 12 groundballs.

Maryland coach John Tillman seemed as happy to be involved with the PCS for a third time as he was with the win.

“It’s an awesome event. The kids have so much fun, it’s a great experience and to me, helping helps to grow the game is really important and to bring our guys out here is a great life experience, ” Tillman said after the game.

For North Carolina, William Perry and Chris Cloutier led the way with two goals apiece while Cunningham, Timmy Kelly and Ryan O’Connell had one goal apiece. Alex Bassill had 11 saves for the Tar Heels, who were praised on their efforts from Tillman.

RECAP: Freshman Justin Shockey won 16-of-20 faceoffs as the Terps took down North Carolina, 11-7, in the @pclaxshootout! #BeTheBesthttps://t.co/Dod6uzvWT4