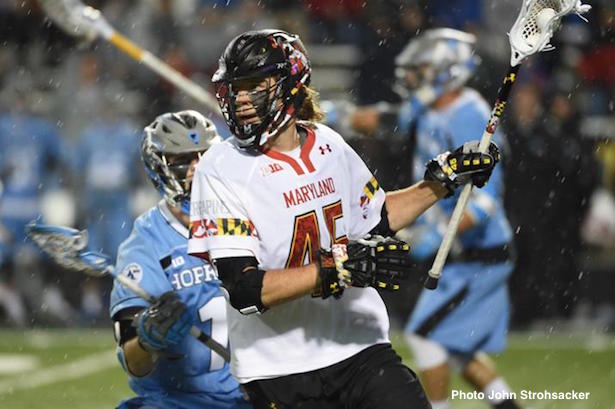 Lacrosse Magazine predicts that the University of Maryland will edge John Hopkins in a close race for the 2016 Big 10 Championship.  The Pacific Coast Shootout now features the favorites of two of the top conference in NCAA Division 1 lacrosse.  The Terps will play ACC favorites Notre Dame in the third annual Pacific Coast Shootout at Orange Coast College on March 5, 2016.  The Fighting Irish are pre-season No. 1 and the Terps are ranked No. 4 making the PCS a potential Final Four preview.

The Terps have earned this preseason front-runner spot by making four out of the last five final fours despite an assortment of question marks heading into each season.

This year is no different, with long-stick midfielder Matt Neufeldt — one of the country’s best freshmen last spring — out for the year with his second ACL tear in four years. Defenseman Matt Dunn, another key returnee, had foot surgery in the fall but is expected back for the spring. Still, behind them is senior goalie Kyle Bernlohr, who did just about all you could ask of someone stepping into a replace a four-year starting goalie like Niko Amato. He was the nation’s top goalie. As a unit, the Terps allowed the fewest goals per game in Division I (7.05).

The offense added a nice piece in UMBC transfer Pat Young, a two-time first-team America East midfielder. And the group that was already there probably performed better than perceived, ranking 27th nationally in goals scored per game (10.21). Maryland brings back first-team all-Big Ten attackman Matt Rambo and midfielders Bryan Cole and Henry West with some other youngsters waiting the in wings. Faceoff expectations are uncertain after the graduation of Charlie Raffa.