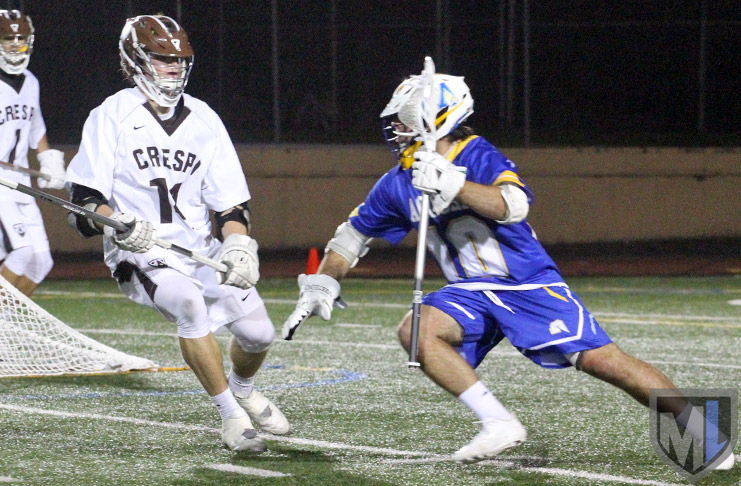 Senior Marty Shargel scored four goals, including the game-winner in overtime, to lift No. 8 Agoura to a 10-9, come-from-behind victory over host No. 18 Crespi in the season opener for both teams.

Agoura (1-0) had trailed the Celts 9-6 with 3:52 to play, but goals from sophomore Tyler Whitney and freshman Douglas McCarthy in the span of a minute raised the prospect of overtime.

Crespi (0-1) had possession with an opportunity to run the clock and shorten the game three times in the final two minutes but turned the ball over each time. The freshman McCarthy finally capitalized, scoring his third goal of the night with four seconds remaining to send the game to sudden-death. McCarthy also had three assists in his high school debut.

The Chargers led 2-0 after the first quarter, but Crespi finally found its offense and forged a 4-3 lead late in the second period. The score was 4-4 at halftime and 5-5 late in the third. But Shargel ripped a close-range shot that Crespi goalie Jonah Enos stopped initially, but the rebound spun across the line to make it 6-5 heading into the fourth period.

Senior Rafa Francisco tied it for Crespi 6-6 when he slipped inside his defender and was body-checked into the crease. The goal was ruled good, and Agoura was a man-down for a minute. Senior Jake Mikovich promptly capitalized, giving Crespi a 7-6 with 8:21 play. Junior Bradley Barberi scored to make it 8-6, and Milkovich’s fourth of the game made it 9-6 and set the stage for Agoura’s late rally.

Shargel (4g) and McCarthy (3g, 3a) led the Chargers’ offense. Whitney, Bo Conrad and Gage Garrison each scored once. Bradley Roache had an assist.

Agoura plays at Calabasas on Monday; Crespi is at home against No. 13 Mira Costa on Tuesday.