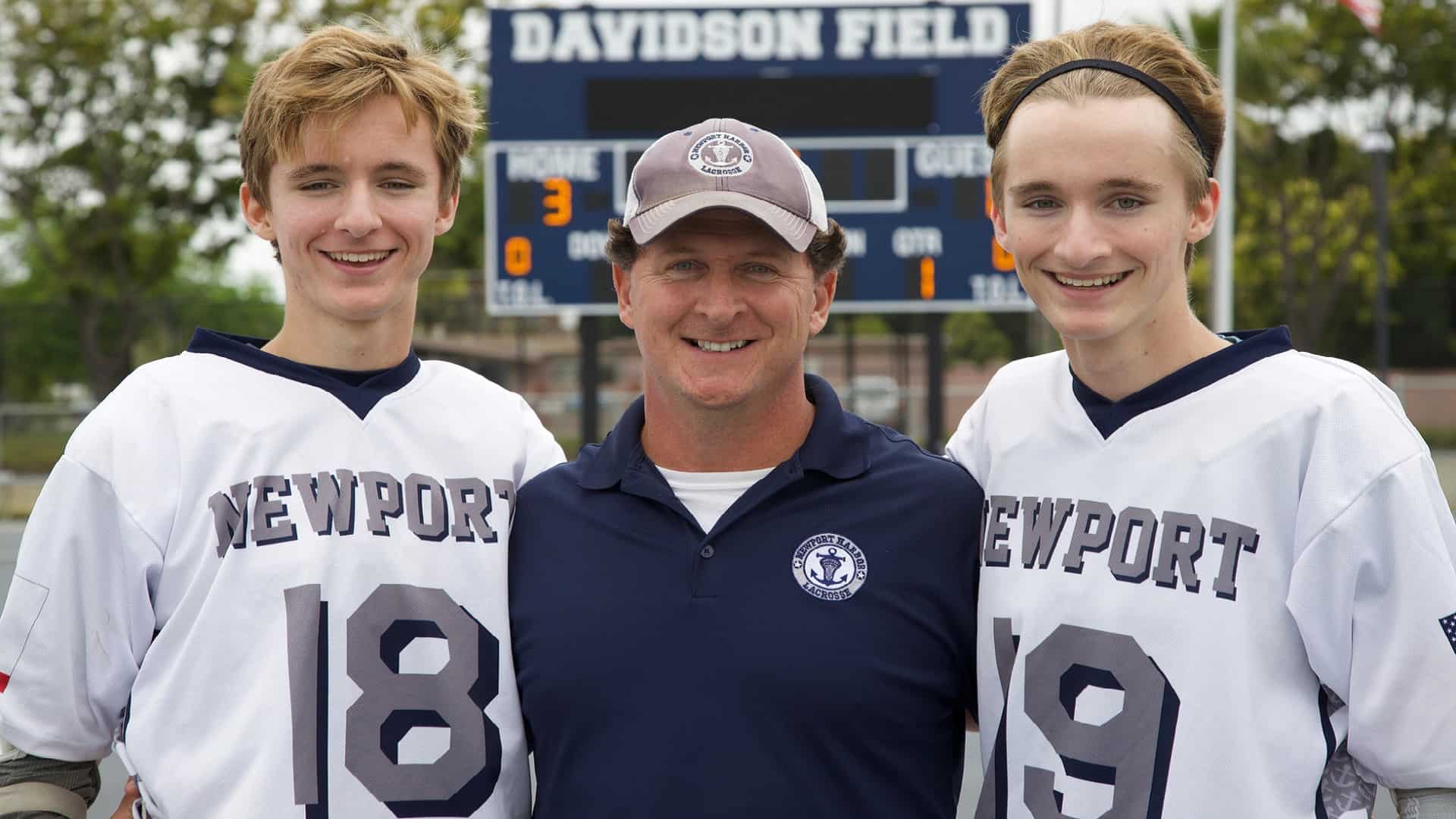 Todd, pictured above with his two sons Jason and Josh, has guided the Sailors to 89 wins and has made the postseason all but one time.

“It’s really important for each program to have the right kind of leadership to lead the young men. I’m blessed to be coaching here and to have the trust of the parents, and these kids make me want to be a better coach,” Todd said.

Todd didn’t get to Newport Harbor High overnight, as he originally coached at Corona Del Mar High School from 2003-2009. After his tenure with the Sea Kings, he was an assistant coach for Huntington Beach in 2010 for then-coach Brian Dunn, who started up the Oilers’ boys lacrosse program with Todd.

According to Todd, Newport Harbor had been through six coaches in 10 years before he came along.

In his first year at Newport Harbor, Todd guided the Sailors, who finished third in the Sunset League to the playoffs where they faced Corona Del Mar. Despite losing a competitive game, Todd said he enjoyed facing off against his former team.

“He really loves the game and loves his kids. He does a lot for them on and off the field,” Mix said. “You know you’re going to get a well-coached competitive group of kids that are going to be well-mannered, respectful and tough competitors.”

Todd and the Sailors showed they were a combination to be reckoned with when they entered the playoffs as the No. 12 seed and upset 5-seed St.Margaret’s 8-7. The Sailors fell to 4-seeded Foothillbefore he was the head coach for the Sailors, in the next game, but went down fighting, only losing 6-4.

Fox said Todd is an amazing individual who is passionate about the sport of lacrosse.

“He’s given up so much personal time and energy to see the program bloom at CdM and then he took over [Newport] Harbor,” Fox said. “He’s a student of the game still, he’s always in the strategy, the X’s and O’s. He loves talking lacrosse, he loves seeing kids execute something he taught them. He gets the most out players which, is incredible.”

The Sailors finally broke through the Sunset League barrier in 2015 and 2016, as they won back-to-back Sunset League titles, going undefeated in league those years as well. But in both of those years, Trabuco Hills beat Newport Harbor in the first round of the playoffs.

Johnny Rodriguez, who coached at Trabuco Hills in 2015 and 2016, has had plenty of great memories on and off the lacrosse field and has plenty respect for him.

“As a coach, he’s one of the biggest competitors in-game I have ever coached against. He loves his kids, he’s got their back ’til death do them part and think that’s very important as a coach,” Rodriguez said.

Like most teams that have their ups, downs are also included. In 2017, Newport Harbor finished fourth place in the Sunset League, also missed the playoff for the first time under Todd.

“Our shooting was really off that year. While we had a good team, I wanted the outcome to be different what it was, but they [the other Sunset League teams] had us beat,” Todd said.

Despite the one-year playoff hiatus, Newport Harbor returned to the top of the Sunset League, finishing a perfect 8-0 in league despite having a young team and making the playoffs. The Sailors bowed out to Santa Margarita, but nearly doubled their win total from seven wins in 2017 to 13 wins in 2018.

“We’ve just always had a good relationship and I respect him for everything he’s done for the league and making sure if we have issues in the Sunset League, his experience helps us get around those issues,” Los Alamitos coach Tim Fox said.

Last year, Newport Harbor went 13-8 and finished first in the Sunset League at 5-0. One of the Sailors’ league came against Corona Del Mar, winning 5-4 and beating the Sea Kings for the first time since 2005.

Newport Harbor also won a playoff for the first time since 2012. The Sailors eventually bowed out to eventual County and Southern Section champion St.Margaret’s in the quarterfinals.

Among some of the other coaches on the Sailors’ coaching staff, Todd’s brother David coaches with him as well. Todd says he enjoys coaching with his brother and has seen growth as coaches between the two.

In addition to helping Newport Harbor’s boys lacrosse players, Todd has helped people off the lacrosse field. Todd, who is also a real-estate agent, sold Rodriguez his first house.

Todd has also been a light to some of his former players. Esteban Ortiz (class of ’15) went through some tough times during his junior high school with he and his family.

“As someone who comes from a low-income family, hearing to him [Todd] talk about his mother and their struggles really got to me. It wasn’t so much a particular lesson he taught me, but more so that while he talked about the bad stuff, he was always quick to talk about the good as well,” Ortiz said.

Ortiz, now a graduate of UC Santa Cruz who is going into law school, aspires of being a lawyer. Ortiz credits Todd for getting him through the tough times.

“I kept pushing because people like Todd taught me to take the punches and just keep going,” Ortiz said.

When he played for Todd, Ortiz said Todd treated everyone the same, no matter who they were.

“Mark Todd treated all of us the same and made sure we all respected one another. He and the lacrosse board gave me an escape and I will forever be thankful,” Ortiz said.

Todd said successful stories from his former players, like Ortiz, are ones that make him proud as a coach.

“The wins and losses [on the field] are fine, but it’s when the kids are winning in life that’s my biggest thing,” Todd said.

This year, expectations are high for the Sailors, who open the season today at Servite at 5 p.m. Despite the success last year, Todd is leaving that in the past and moving on to the present.

“This is a whole new season. We have a much more difficult strength of schedule and we have much bigger expectations than where we finished last year, so we got a lot of work to do,” Todd said.