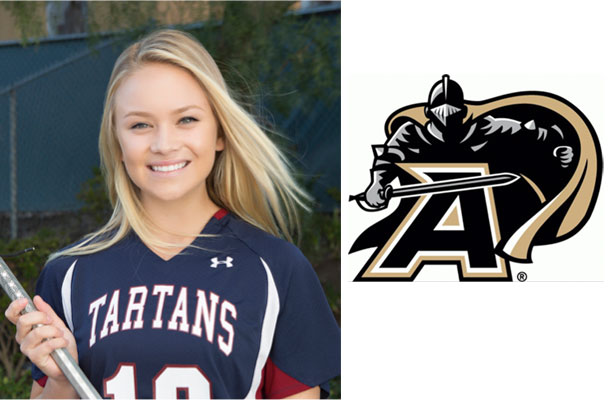 Cameron Manor, a rising junior at St. Margaret’s Episcopal School recently verbally committed to play D1 lacrosse at the United States Military Academy as an incoming freshman in 2017.  Manor has sported the number 10 jersey for the varsity St. Margaret’s team for two years as a starting midfielder. She has scored 128 points (95 goals and 33 assists), won 88 draws,  and recovered 52 groundballs in her two years sporting the Tartan plaid.

Among her accomplishments are being a two-time National Team member and earning 2nd Team All County honors in 2014 and 1st Team All County honors this year. She is an asset to the Tartans, and will continue to be, as the 2015-2016 season approaches. Manor has also been a force to be reckoned with as she has sped by competitors as a member of the West Coast Starz team and XTEAM clubs in her six years as a lacrosse player. She has also been invited to play at the Northstar Invitational and was awarded Rookie of the Year at Saint Margaret’s in 2014.

West Point has just recently added Women’s Lacrosse as a D1 team that will begin playing in the 2015-2016 academic year. They will join the other current nine teams (American, Boston University, Bucknell, Colgate, Holy Cross, Lafayette, Leigh, Loyola University Maryland, and Navy) in the Patriot League. Saint Margaret’s Varsity Coach, Holly Reilly, had the following to say about the player West Point Coach, Kristen Waagbo, will be gaining in two years;

“The United States Military Academy recruits and selects highly competitive and intelligent students.  With the inaugural women’s lacrosse season in 2016, the Army establishes another terrific opportunity for female athletes to participate in a varsity level sport and serve their country.  As Army Women’s Lacrosse gains momentum, talented lacrosse players around the country will recognize the wonderful opportunities afforded by the academy, and I believe more young women will consider the Army.  As an Honorable Mention All-American, 2017 recruit and Army commit, Cameron Manor, is a significant recruit for Army Lacrosse.  Cameron has played throughout the country in recruiting tournaments and brings with her a strong work ethic and lacrosse IQ.  I am very excited for Cameron’s future lacrosse career and the future of another strong DI Lacrosse Program in Army Women’s Lacrosse.”

All of those close to Manor are extremely proud of her and cannot wait to see what the future holds for her.