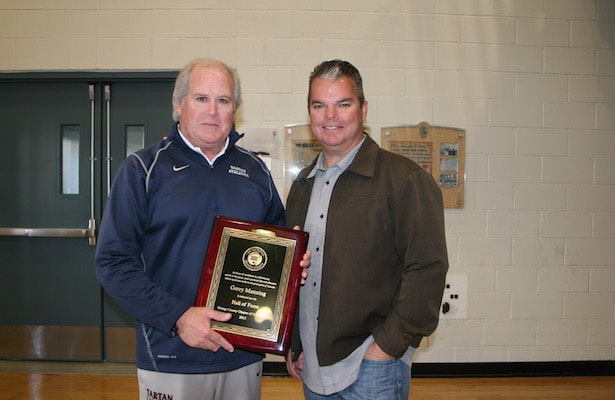 Gerry Manning was announced on March 9 as the latest inductee into the OC Chapter of the U.S. Lacrosse Hall of Fame. Manning founded the St. Margaret’s Episcopal School lacrosse program in 2001, and served as its only head coach through the 2012 season. His presence in Orange Country lacrosse dates back to his days as a high school player with the OC Lacrosse Club from the 1960s. Manning works as a P.E teacher for grades K-5 at St. Margaret’s Episcopal School, and coached the 6th grade lacrosse team to an undefeated season in the PAL league this year.

Over 20 former players St. Margaret’s players have continued to Division 1 NCAA, Division 3 NCAA, and MCLA teams, and several give back to the game via coaching at the youth, high school, and college ranks.   Manning was named OC USL and OC Register Coach of the Year in 2011, and is one of only two coaches in Orange County history to earn over Varsity 100 wins. His overall record was 123-54 (69.5% winning percentage). The success of the program he established derives from the Tartan lacrosse mission: to honor the game. These tenets derive directly from Manning’s personal strength of character as a compassionate, caring, and dedicated teacher of the game of lacrosse.

After winning the OC Lacrosse Association Championship and State Club Championship in 2005, St. Margaret’s was the first CIF approved Boys’ program in Orange County, playing in the CIF –San Diego Section for the 2006 season, going 10-0 in the Coastal Conference and reaching the CIF-SD Quarterfinals, losing to Torrey Pines 7-6. Since the establishment of the CIF play for Lacrosse in 2007, St. Margaret’s won or shared the Trinity League all of its years when Manning was Head Coach, with a combined Trinity league regular season record of 43-5.   For the league it has competed in, St. Margaret’s won eight consecutive league titles (OCLA 2005, CIF-SD Coastal Conference 2006, and Trinity League 2007-2012), and reached at least the quarterfinals of its respective championship each from 2004-2011. Additionally, five Tartans have earned US Lacrosse High School All-American honors, and three have earned USILA Academic All-American honors.

Prior to Manning, the most recent OC Chapter Hall of Fame inductee was Hank Nunez, long time Foothill Assistant Coach and OC Lacrosse Association board member, who was named in 2009. The lacrosse community will honor Manning at the OC Semifinals on May 9 at Yorba Linda High School, and plans are underway for a public reception on the evening of May 2 to correspond with the playoff seeding release for boys and girls. If you are interested in helping with this event, please contact peter.clark@smes.org