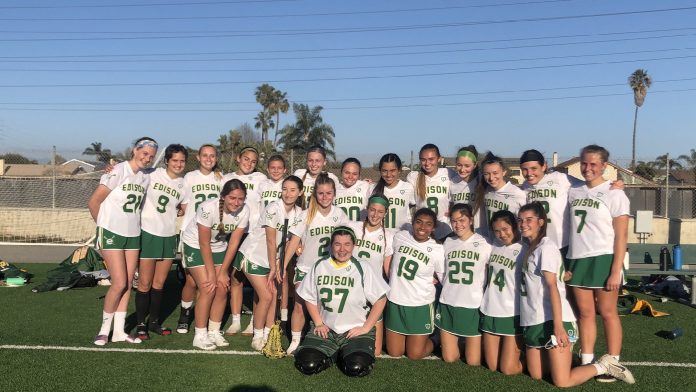 In an early top 10 CIF-SS girls lacrosse showdown, No.8 Edison came away with arguably the program’s biggest victory ever, upsetting No.2 St. Margaret’s 18-14 on Tuesday at Edison High School in the season opener for both teams.

“We came out hard. We’ve been working really hard in the offseason and we just wanted it really bad,” Chargers coach Olivia Smart said. “I have poured everything I have into this team and into this season, and so it’s really exciting just to see it pay off.”

Blakely Malpass led the Chargers with five goals while Gwen Ontiveros added four goals. Ali Bryant and Melanie each had three goals for Edison, which got two goals from Sydney Hoaggard, one goal from Anna Beachner and five saves from Cailien Gorsuch.

“I’m so proud of the hard work we’ve put in. We come out here, we grind five days a week and at the beginning of our very first season, no one thought anything of us and it motivated us to work harder,” Malpass said.

Lauren Lamb led the Tartans with five goals while Grace Karstetter chipped in four goals. Minka Martinez added three goals for St. Margaret’s, which also got one goal apiece from Thalia Pollard and Amelie Samluk and 17 saves from Olivia Young.

The game started out back-and-forth, as both teams went back and forth with one another in terms of taking the lead in the first five minutes. After the Chargers took their first lead at 3-2, the Tartans rattled off five straight goals to take a 7-3 lead at the 13:32 mark.

Edison responded with a run of its own by scoring four straight goals tying the game at 7-7 at the 5:35 mark. With game tied at 8-8, St. Margaret’s scored four of the last five goals to take a 12-9 lead into halftime.

The Chargers came out looking like a different team, as they scored eight goals in the second half and led 17-12 near the halfway point. The Tartans didn’t get their first goal of the half until the 10:50 mark, as they went 14:49 without a goal, dating back to the first half.

Lamb added another goal for the Tartans at the 5:57 mark, but that was the last goal the Tartans would get, as the Chargers’ defense kept the visitors at bay and Gorsuch made all of her saves in the second half. Smart said that Gorsuch was playing in her first varsity game and bounced back well after a rough first half.

“This was her first varsity game ever, so I think it was just nerves that got her in the first half, but second half, her confidence grew a little bit and I think she got it a groove,” Smart said of Gorsuch.

“I think we have grown tremendously. I think a lot of it has to do with the mentality we have,” Bryant said. “We have a target on our back now, we’ve had to earn that respect from our opponents and I feel all four years every game we just keep climbing and climbing to the top and it’s really showing.”

Despite St. Margaret’s not getting the win, coach Mollie Stevens was proud of how her team battled.

“Obviously no one likes losing, but Edison was a great team, they came out to play and unfortunately we let off the gas and it’s good learning experience and a great start to our season to work and build and see what we have to work on,” Stevens said. “I think we had great offensive movement, we had a lot of assisted goals and we had a lot of great defensive stops. I just think we need to play a full 50 minutes versus one half strong and the other half not.”

Next up for the Chargers (1-0), a home showdown against Mater Dei on Monday at 4 p.m. For the Tartans (0-1), they won’t be back until Saturday March 27 when they play at Canyon Crest Academy at 1 p.m.