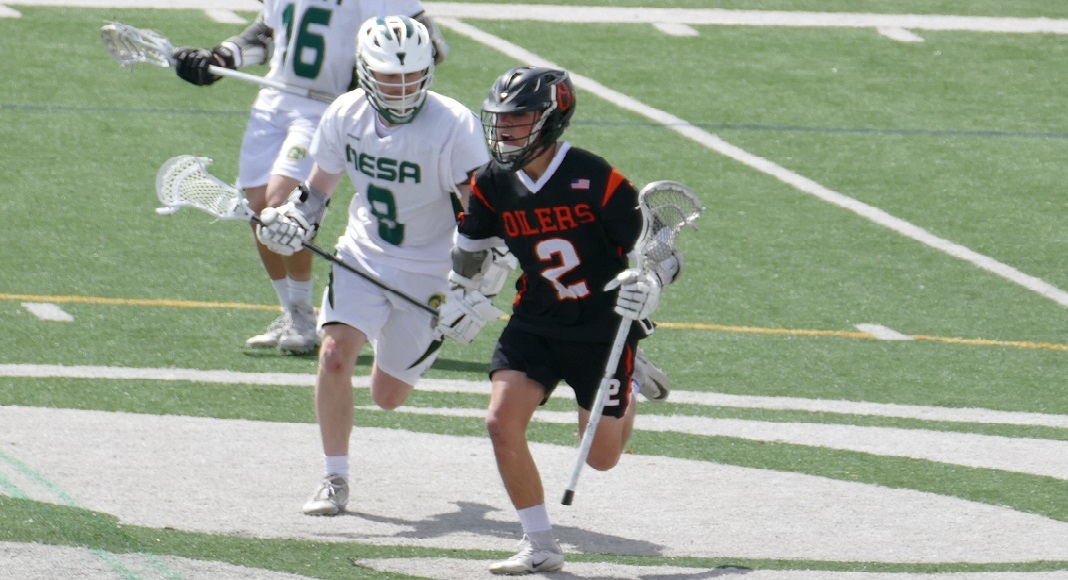 Every player has a different path in their lacrosse journey. For Dylan MacDonald, a senior captain for the Huntington Beach High boys lacrosse team, his journey has been a somewhat difficult one.

If you’ve seen MacDonald play, his difficulty is obvious — he plays with only one hand, as his right arm ends around his elbow. Nevertheless, MacDonald stayed the course and continued to play lacrosse.

Nothing came easy. He considered quitting lacrosse in about fourth grade, as the sport was becoming difficult for him. But he didn’t let the adversity deter him.

“It was really hard,” MacDonald said. “I ended up playing one more season, and I ended up really liking it. I don’t even think I have one arm anymore.”

Dylan said he looked up to his friends and teammates as he strived to be as good as them. He also watched professional lacrosse players such Lyle Thompson to try and emulate what they do.

School wasn’t easy either, as MacDonald finished most assignments behind everyone else.

Like most kids, MacDonald played multiple sports growing up, and he had his younger brother Brody by his side providing competition and inspiration.

“Just seeing him, and I wanted to be just like him, motivated me to play sports and do other things, and I think that really helped me get to where I am,” Dylan said of his brother. “I’m really competitive, and having a brother who’s almost the same age as me really helps.”

Dylan played football, soccer, hockey and basketball until he found that lacrosse was the perfect sport for him. In sixth grade, he met Michael Lacy, current Huntington Beach head coach.

“I’ve seen him grow from a little middle schooler to a high schooler to a young man,” Lacy said. “Just to see him go from not having the [guts] to speak a word to me, to ask me if he’s doing something wrong or right, to commanding a team.”

Lacy said Dylan is what Huntington Beach High School athletics is all about — he doesn’t make excuses; he’s competitive; and he is a true student-athlete. Lacy also said he tried playing lacrosse with one arm, to understand what Dylan goes through on the field, and it didn’t turn out so well. At least one ball disappeared over the fence.

“He doesn’t make excuses,” Lacy said. “If he does he’ll have some good reasoning behind it. I was surprised by what he can do. He’s never made an excuse about being disadvantaged.”

Dylan played junior varsity in his first two high school seasons, including a sophomore season to remember as part of an undefeated team (18-0) that won the Sunset League.

The cherry on top of that year was when Dylan got called up to varsity when the Oilers’ won the Sunset League and made the playoffs. While the Oilers lost to the top-seeded Corona del Mar Sea Kings that year, CdM coach G.W. Mix was humbled and honored to see Dylan play.

“It never ceases to amaze me with his athleticism, his ability, his talents and his heart,” Mix said. “He’s just a terrific competitor, and he’s special for sure, and my only disappointment with him was that I never really had the opportunity to coach him. But he makes me proud to be a lacrosse coach and proud to be a part of this game.”

Dylan made varsity his junior year, the same year Lacy was promoted to head coach. Former teammate Grady Mercier (’18) said Dylan is one of the quickest and most agile attackmen he’s played with.

“What he’s able to do is very impressive,” Mercier said, “and his skill on the field would be impressive enough even if he had both arms. The fact that he only has one [arm] is a testament to the work ethic and skill Dylan has. Not to mention Dylan has a great attitude, especially when it comes to his situation.”

Brody MacDonald said his older brother makes him improve as a player. He’ll miss playing with him once Dylan graduates.

“As kids, we used to practice in the back together, and it just makes it more fun,” Brody said. “I don’t even think about him having one arm, because he can basically do everything, and he’s better than a lot of people with two hands at a lot of stuff.”

Dylan committed to Aurora University, where he’ll continue his lacrosse career starting in the fall. Brody said it’ll be weird not having his brother around.

“He’s taught me to be more selfish,” Brody said, “because I never used to like shooting the ball, but in some situations I need to.”

Though the Oilers didn’t make the playoffs this year, finishing 10-9 overall and 2-3 in the Sunset League, Dylan said his team’s goal was to have fun, which they did. As his high school lacrosse career comes to a close with a nonleague game against Marina on Wednesday, Dylan’s advice to everyone is to “keep going, and push through all the hard things.”

“Honestly, there’s going to be small things that [tick] you off,” he said. “You just got to push through and you’ll be fine.”