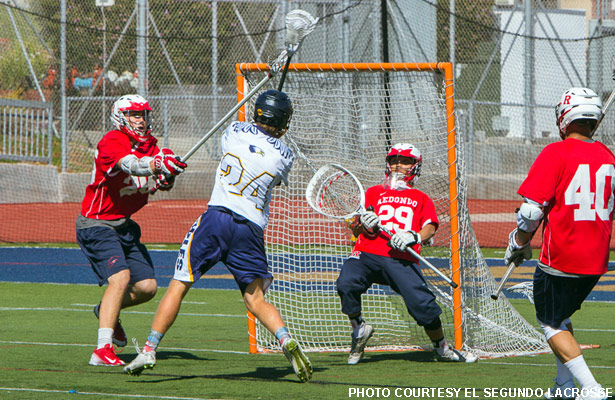 Lund, who missed two games earlier this season, is making up for lost time. He has scored 18 goals and recorded 14 assists in three games since his return, all Eagles victories.

Wednesday, El Segundo raced out to a 6-1 lead on the Sea Hawks after one quarter. Redondo recovered from that early deficit, though, and stayed within striking distance the rest of the way behind stellar face-off play (the Sea Hawks won 23 of 32 draws) and a string of El Segundo penalties that kept Redondo in man-up much of the third quarter.

In the end, though, the Eagles simply had too much offense. In addition to Lund, junior Daniel Ball (3g, 1a, 7gb), freshman Lukas Roscoe (3g), and senior Preston Quashnick (3g, 1a) each scored three goals. Sophomore Rory Cochrane scored twice for the Eagles. Goalie Alex Nolan made 10 saves.