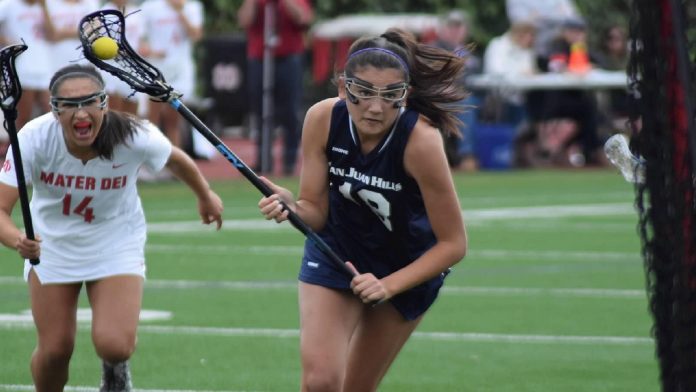 Lucy Hodge (San Juan Hills ’20) was named the recipient of the 2020 Jackie Pitts Award.  Hodge  was was a four-year varsity player and a two-time captain for the Stallions.

The Jackie Pitts Award, which is administered by US Lacrosse, recognizes graduating seniors across the country who truly honor the game of lacrosse, is invested in the development of the game in her community, is an exceptional player who continually strives to improve her game, and is an exemplary member of her team.

“She has been a tremendous asset to the program over the past four years and it’s been awesome watching her grow as a player and young person. She is thoughtful and hard working,” San Juan Hills girls lacrosse coach Michael Welter said.

Welter also mentioned that Hodge graduated with a 4.5 GPA and will be attending Tufts University in Massachusetts, where she will also be playing lacrosse. One thing Welter liked in Hodge was that she helped the younger students’ drive to achieve in academics.

“We coaches really appreciated having her on the field because she would act like a big sister to some of the athletes which is something I could never do,” Welter said.

In addition to her commitment to academics, Hodge also finds the time to contribute to the community.   The aspiring obstetrician-gynecologist logging 300 hours at the Mission Hospital Labor and Delivery floor for the past three years.

In addition with helping out with the hospitals, Hodge was the president of an Anti-Human Trafficking club, a four year member of the Advanced Chamber Orchestra, a part of the Dual-Immersion Spanish program for bilingual students, a Multicultural leader for English Second Language Students, a member of the National Honor Society, and a Young Life Club leader.

“I did my best to use my individual strengths to give back to the school in any way I could,” Hodge said. “I’m in a dual immersion program which has made me bilingual in Spanish and English. I absolutely love hearing the stories of these amazing students and getting to know their personalities.”

Outside of lacrosse, Hodge received the Seal of Biliteracy, was an AP scholar with distinction, valedictorian, a scholarship winner for the athletic boosters and a recipient of other scholarship awards at the school.