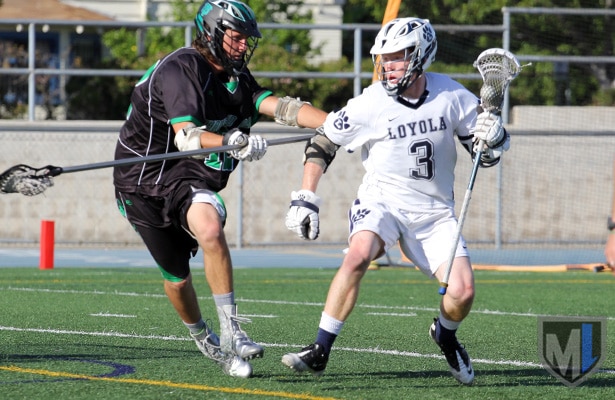 Loyola senior attackman Sean Smith, an All-American, a two-time All-Mission League selection and one of the more versatile players in Los Angeles, announced Sunday he will attend and play lacrosse at NCAA Division III Connecticut College.

“Coach Seth played with Coach Cornell [at Gettysburg], so he put me in touch,” Smith said, adding that he didn’t know much about the school at the time. “I was looking for a really good academic school that I could use lacrosse to get into. I felt like at Conn College I’d be able to play, maybe even early on, plus it had the academics I was looking for.”

He visited the campus in New London, Connecticut, on Friday, then took a step back. The proximity to New York and Wall Street was attractive, as was the school’s reputation for placing its graduates in the workforce.

“I realized it had everything I wanted, both in lacrosse and academics,” he said. “They had four kids who already had jobs before their senior year started.”

So he pulled the trigger, choosing the school that expressed the most interest and the one where he thinks he’ll best fit, both on the field and in the classroom. Coach Tietjen agrees.

“His work ethic is exceptional and will undoubtedly lead him to success in the classroom and on the field, playing in the toughest conference in Division III,” Tietjen wrote in an email. “Connecticut College is getting a special player and a well-grounded young man. I am just glad we have him for one more year.”

Smith also looked at Lynchburg and Haverford, as well as Division I programs such as Holy Cross and Colgate, but he said he was a bit of a late-bloomer on the recruiting circuit and many teams’ 2016 recruiting classes were full, meaning he likely would have had to gain acceptance to those schools on his own and walk on to the lacrosse team. So Connecticut was an obvious choice. “It’s good to go where you’re wanted,” he said.

Connecticut is a member of the New England Small College Athletic Conference (NESCAC), home of two-time defending NCAA D-III champion Tufts, as well as Amherst, Middlebury and Bates, all Top 20 teams in the final USIL coaches poll in May. While the Camels went only 4-11 last spring, they have qualified for the NCAA Tournament as recently as 2012. Emmett Gormican, a freshman middie from San Diego’s Coronado HS, was the only Californian on Connecticut’s 2015 roster.

At Connecticut, Smith will join fellow Class of 2016 commit Connor Jongewaard, a goalie from Palos Verdes and Smith’s teammate for four years on the old LA Lazers. “That was kind of the cherry on top,” Smith said. “I’m looking forward to playing with him for four more years.”

I can officially say that I am committed to play lacrosse at D3 connecticut college. #committed #d3bound

Smith also has played for the Pasadena Tribe and Silverfin locally, and he credited Silverfin founder and coach Patrick Smith with providing support and guidance, both on the field and in the recruiting process.

Now, with that process concluded, Smith has one more season at Loyola to think about.

“Sean has been a critical asset to the Loyola program since he first stepped onto campus,” Tietjen said. “He is the very definition of a ‘multi-dimensional’ player. His freshman year, he played left-wing attack, despite being naturally right-handed player, producing 20-plus points and earning rookie of the year honors.

“The past two years, he has quarterbacked our offense playing behind the cage. In the true spirit of a dynamic athlete, he did this while taking face offs, filling in at midfield and leading the team in points, ground balls and face-off percentage.”