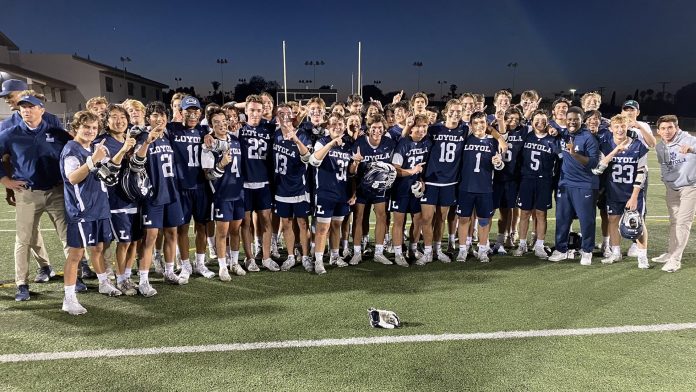 The Loyola boys lacrosse team made history on Tuesday night, as it became the first team to win the CIF-SS Division 1 championship, defeating Foothill 9-7 at Tustin High School

“It was tough going into their house for the championship game and they played outstanding, Coach Fox is the best and we are all chasing him. I am just so proud of our guys and the adversity we were able to overcome over the course of not only the season but the entire last year once we found out the 2020 season was canceled,” Cubs coach Jimmy Borell said

Like most games between the Cubs and the Knights, it was back and forth as the opening quarter saw both teams trade goals. With the score tied at 2-2, Jackson Hines found Fox with four seconds to give Foothill a 3-2 lead after the opening quarter.

The second quarter saw Loyola put pressure on Foothill’s defense as it kept firing shot toward the goal, forcing Garcia to make big saves. The Cubs’ offense broke through, tying the game at 3-3 courtesy of Lee and taking their first lead at 4-3 with a goal from Silvestri.

The Knights didn’t stay down for long, as Roman Pistone launched a rocket of a shot into the goal, tying the score at 4-4. Loyola had chances to take the lead going into halftime, but Garcia was there to make sure keep the score was knotted up.

Knowing that facing a two-goal deficit against Loyola going into the fourth quarter would not be ideal, Copeland scored with 40 seconds in the quarter making the score 6-5. The 40 seconds were plenty of time for Loyola to get a goal, needing only 28 of it, as Silvestri registered a hat trick, giving the Cubs a 7-5 lead going into the final 12 minutes of the boys lacrosse season.

Like the past two playoff games, the fourth quarter was when Foothill had to come up big, as Roman Pistone scored one of his signature sniper-like goals to cut the lead down to 7-6. With less than five minutes remaining, Copeland’s shot was saved by Henry Link, but the ball rolled over to Seiler who scored the equalizer, tying it at 7-7 at the 4:37 mark.

After a little over two minutes of neither team scoring, Silvestri netted his fourth goal, giving Loyola the lead at 8-7 at the 2:25 mark. 29 seconds later, Gaffney scored a crucial goal put the Cubs up 9-7 with 1:56 remaining.

The rest of the way, the Cubs’ defense made sure the Knights would not get a clean look to make any sort of a comeback. Eventually, the clock hit zero and the Cubs, as well as some of the Loyola faithful, stormed the field knowing that history was made.

“It was a hard fought game and a team effort all around all year. Everyone chipped in on the success,” Knights coach Jon Fox said.

The Cubs were highly efficient at the X, as they won 14 out of 19 faceoffs. Their defense was also stingy, as it pressured the Knights into turning the ball over 13 times.

“I will never forget this group and how hard they worked and the hurdles we had to get over to get back on the field just to train together as a team. What these guys were able to accomplish as a team was truly special and I will never forget it,” Borell said.