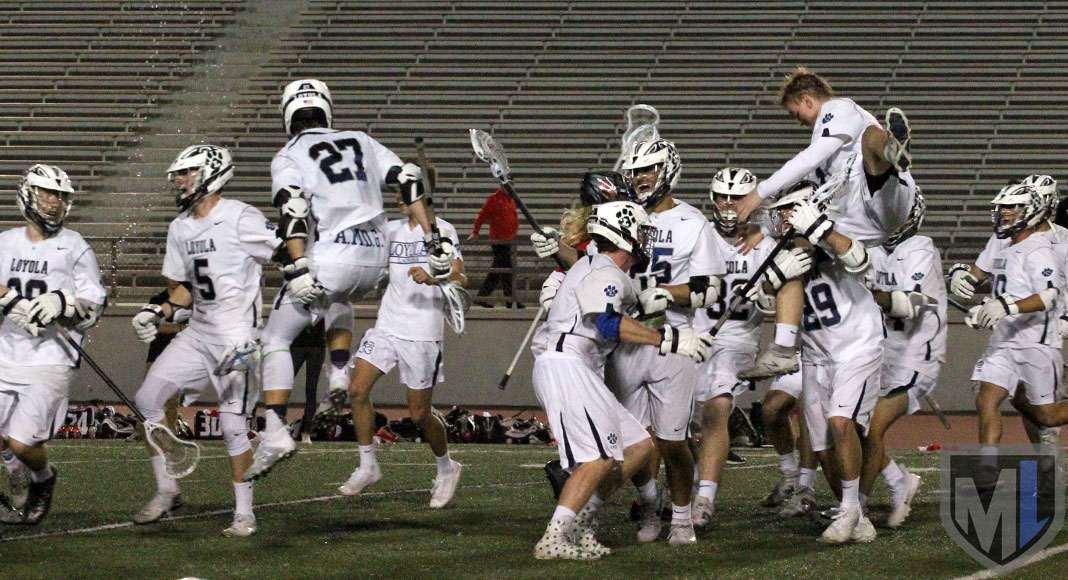 No. 1 seed and two-time defending section champion Loyola trailed No. 2 Palos Verdes 5-3 midway through the third quarter of Wednesday’s US Lacrosse LA Boys Championship Game, then scored the game’s final six goals to win 9-5 and claim its third consecutive LA title. All three victories have come against the Sea Kings.

Wednesday, the Cubs found themselves playing from behind against the Sea Kings (19-4) through much of the game. Palos Verdes scored the game’s first goal and held leads of 3-1 midway through the first period and 5-3 midway through the third period. Loyola didn’t take its first lead until 7:51 remained in the contest.

“This was one of the sloppiest,” Loyola coach Seth Cohen said of his team’s ragged first-half play. “I’ll give them credit; they put some pressure on us. I think the moment was a little big for us, to be honest with you, when we first came out of the tunnel, so to speak. And we had a whole bunch of unforced errors, where we just turned the ball over, threw it away. I don’t know if it was nerves or what.”

The Cubs had at least six first-half turnovers, most of them unforced, and Palos Verdes capitalized. If not for seven first-half saves from Cubs junior goalie Will Parducci — who had 13 saves in the game — Loyola would have faced a much bigger deficit.

Every time PV began to build a lead, the Cubs responded. When Luc Charbonnier scooped up a rebound of a Parducci save and flipped it in to give PV a 3-1 lead at 6:03 of the second period, Loyola’s Speed Fry scored unassisted a minute later. Kaiser Fry then scored with 55 seconds left to tie it 3-3 at the break.

When Charbonnier scored his second to give Palos Verdes a 5-3 lead with 6:58 left in the third, freshman Owen Gaffney and senior Wes Priestly scored 90 seconds apart to tie it 5-5 heading to the fourth quarter.

“I’m proud of my guys for just fighting back,” Cohen said. “We were down the whole first half, kept falling behind, and falling behind.”

Until the fourth quarter.

Gaffney scored his second at the 7:51 mark to give the Cubs their first lead of the game at 6-5. A minute later, senior Liam Miller found senior Henry Hasenberg for a low-to-high rip that made it 7-5. As the clock ticked under four minutes, Priestly got over the top of his defender to extend the Cubs’ lead to 8-5, and Miller found Hasenberg again 50 seconds later to nail the door shut.

“I think our depth eventually maybe wore them down,” Cohen said. “They play a smaller group of guys, and by the end they were running a little ragged, and we were pressing things and not turning it over as much.”

Four of Loyola last six goals were unassisted, one-on-one efforts, and the other two were Miller-to-Hasenberg connections between two seniors who knew where the holes in the PV defense would be.

But as much as the late-game burst of offense deserves credit for the Cubs’ second win over Palos Verdes this season and third in a row going back to last year’s LA title game, it was the defense that once again created the opportunity for victory.

Loyola has not allowed more than five goals in a game since an 11-10 overtime loss at Cathedral Catholic (San Diego) on April 12, a streak of eight consecutive victories. And that OT loss was only the second time in 24 games this season the Cubs have allowed double-digit goals.

“The defense stepped up again in the second half,” Cohen said. “What can I say? What an amazing second half for our team. It’s just incredible.”

“I just have so much respect for Jimmy and his program,” Cohen said, “and the fact that they show up here eight years in a row is incredible. They have a young squad over there with some good guys.”

Beating Palos Verdes not only secured the LA championship, it also gave the Cubs a 14-0 record against teams from the LA region of US Lacrosse this season. Loyola hasn’t lost to an LA team since the Sea Kings beat them in the regular season last year.

Loyola went 3-2 against Orange County teams this year and 3-2 against teams from outside the Southern Section.