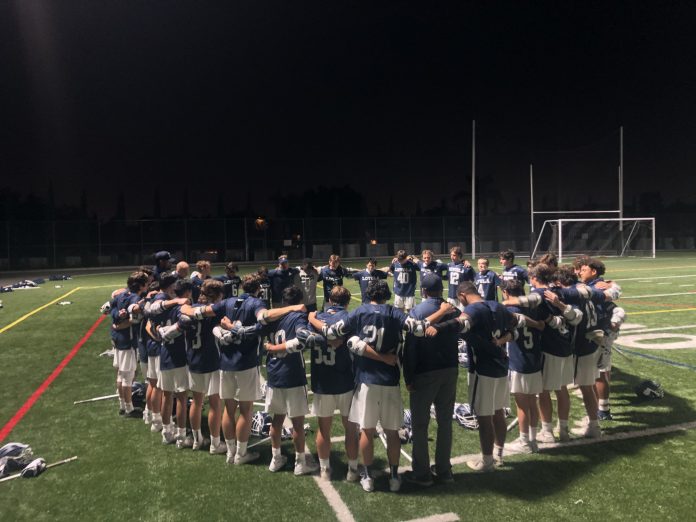 The Loyola boys lacrosse team defeated Corona del Mar 9-6 on Friday to set up a showdown with Foothill in the first-ever CIF Southern Section Championship game on Tuesday. The Cubs will play for supremacy amongst the teams in the Southern Section for the fifth consecutive time. It took a pandemic to interrupt their streak that began in 2016.

The Cubs jumped out to an an early 3-0 lead to start the game and the Sea Kings were never able to recover.  Aiden Lee, Owen Gaffney scored the only two goals of the first quarter and then Luc Dumont added a third early in Q2 before Lucas Newton finally put CdM on the board.

Robert Roges and Matteo Silvestri quickly responded to open Loyola’s biggest lead of the game, 5-1 lead. Ty Caffarelli followed up for CdM with a goal on a pass from junior, Nic Peloso. Loyola was leading at halftime 5-2.

The Kings tried to gain some momentum early in the third quarter via a man-up goal from Newton to Caffarelli to cut the Cubs lead to 5-3.  But Loyola continued to show off their offensive depth when Owen Roberts became the sixth Cub to find the back of the net.

CDM answered with another successful man-up goal from Newton to senior, Shawn Frome.  Loyola led 4-6 after three quarters. With just a two goal spread, the game would be decided in the final 12 minutes.

Although disappointed in the outcome of this game, the Sea Kings, having won 10 of their 11 last games with a roster loaded with talented juniors and underclassmen look forward to 2022 with great optimism. The Cubs turn their attentions to Foothill as the prepare for Tuesday’s championship game.