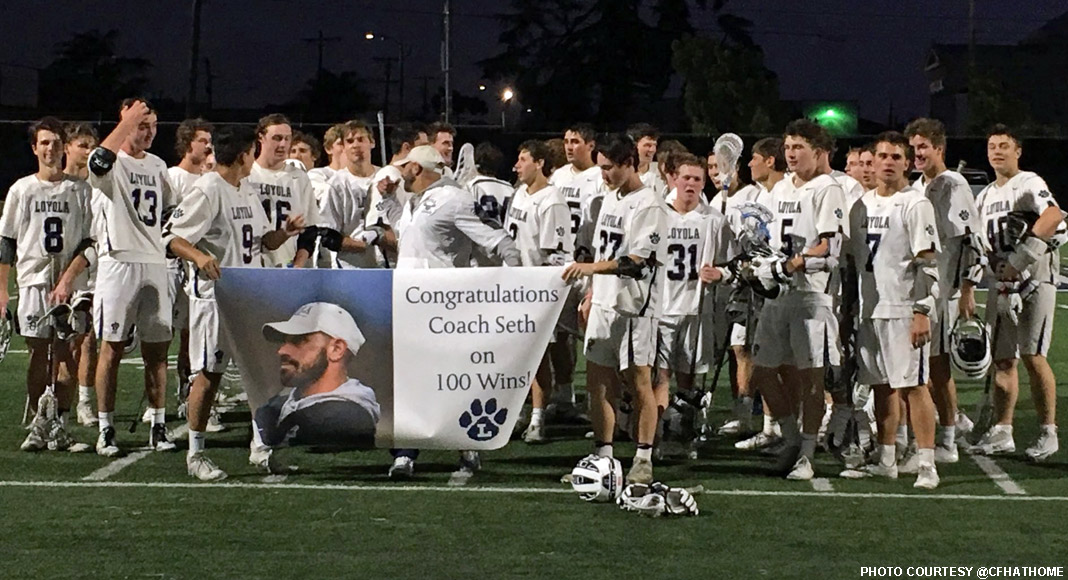 All four home teams and higher seeds in the top half of the US Lacrosse Postseason Championship Tournament advanced Tuesday, winning by an average margin of 10 goals.

The top-seeded Loyola Cubs handily defeated the No. 16 Santa Monica Vikings 16-2 Tuesday, claiming the 100th victory of head coach Seth Cohen’s six-year tenure. After winning 12 games his first season and 15 in each of the next two, Cohen has led Loyola to back-to-back 20-win seasons and Southern Section championships. This year, the Cubs are 17-4 and eyeing another LA title and chance at a third section crown.

Behind a four-goal, one-assist performance from Jack Carolan, the Mission League champs took care of business against Ocean League champion Santa Monica. The Cubs picked up where they left off in last week’s Mission League Championship, a game in which they steamrolled No. 3 Harvard-Westlake 14-2.

Led by Robert Henderson, Patrick Casani and Dimitri Pouliopoulos, Loyola’s staggering defense flexed its muscles once again, keeping the Vikings (11-8) scoreless through the first half. Alex Horowitz was the maestro in Loyola’s midfield, tallying three assists to go along with two goals.

Up next for the Cubs is a second-round meeting with No. 8 Westlake, which defeated No. 9 San Marcos. Loyola hasn’t lost to another LA team since Palos Verdes beat the Cubs in April 2017, a streak of 16 wins in a row.

No. 8 Westlake Blows Past San Marcos in Second Half

The most competitive match on paper turned out to be a one-sided affair as No. 8 Westlake’s high-octane offense overpowered No. 9 San Marcos en route to a 20-9 first-round victory.

San Marcos, in only its fifth season of CIF lacrosse, managed to stay with the high-scoring Warriors through the first half, trailing only 5-3 after one quarter and 9-6 at halftime. But Westlake began to open it up in the third quarter, extending its lead to 13-8, then accelerated through the final whistle with a 7-1 fourth-quarter scoring edge.

Westlake’s trio of Duke Cohen (5 goals, 1 assist), Seamus O’Brien (5g) and Nick Reilly (4g, 1a) was ultimately too much for San Marcos (13-3) to handle. The three carved up the Royals’ defense with quick precision and ball movement.

The Warriors (14-5) travel Thursday to face No. 1 Loyola. The teams haven’t met since the second round of the 2014 playoffs, when Loyola eliminated Westlake 12-9.

The Chaminade Eagles rode a strong defensive effort in the first half, holding No. 13 Palisades to one goal at the midway point in a 12-6 victory.

Trevor Roberts and Nino Leone scored in the game’s first four minutes, helping Chaminade (11-4) take control early. By halftime, the Eagles had flown out to a 9-1 lead. Palisades finishes its season 11-8.

With the victory, Chaminade moves on to the second round where it will play host No. 5 Agoura. The Eagles beat the Chargers 8-7 back in late February but had to overcome a furious Agoura rally in the fourth quarter to do it. The Eagles led 8-3 after three quarters but Agoura did not go quietly.

A 5-0 third-quarter blitz turned a relatively close game into a blowout Tuesday, carrying the No. 5 Chargers to a 13-4 victory over No. 12 Mira Costa.

Agoura (14-5) led 7-2 at halftime but blanked the Mustangs (10-6) in the third period to extend its lead to 12-2 heading to the fourth. Gage Garrison scored four goals to lead the Chargers, and Bo Conrad scored three.

Next up for Agoura is a rematch with Chaminade, which beat the Chargers 8-7 in February. That was one of three one-goal losses for Agoura, which has won seven in a row.