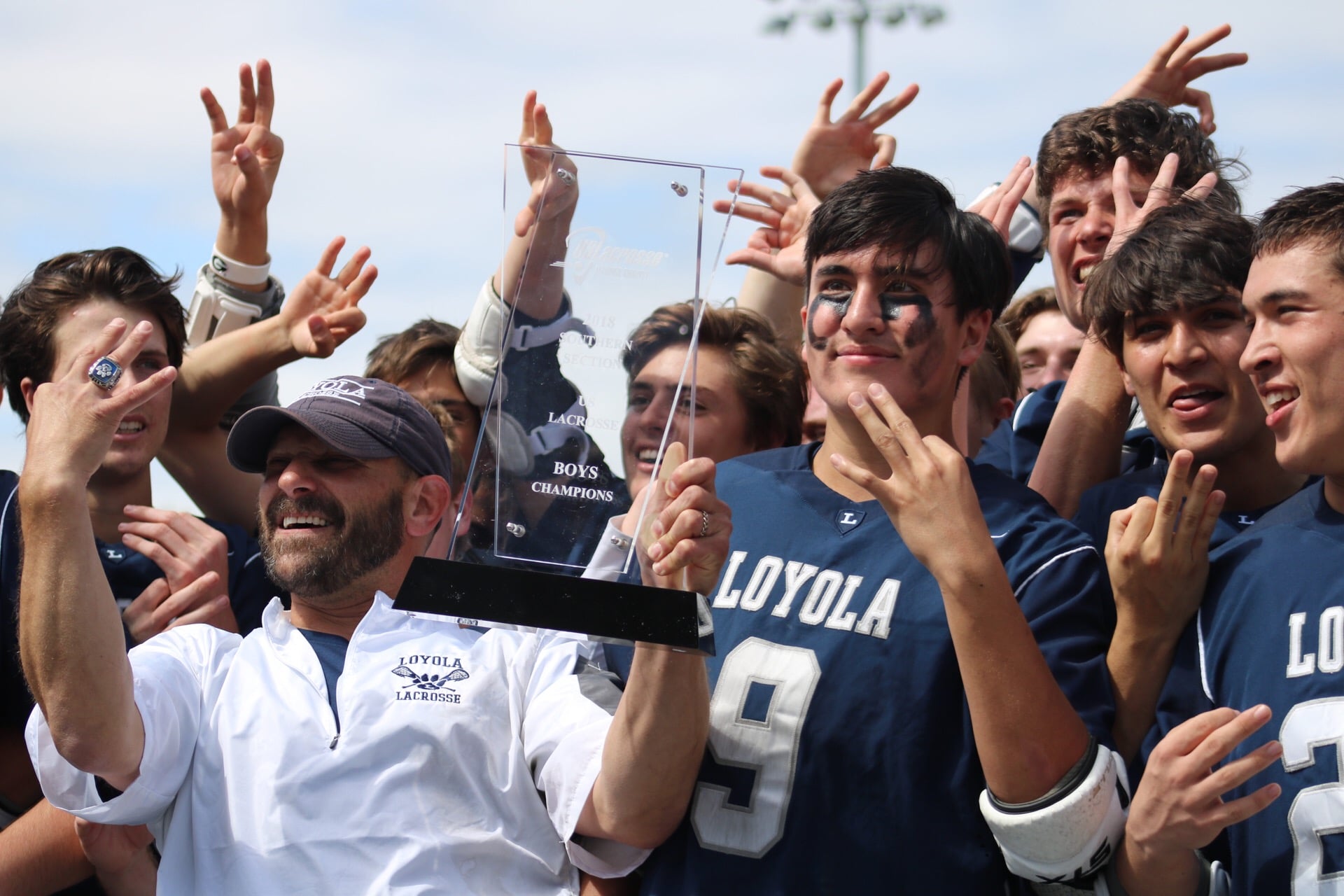 With Loyola’s third consecutive championship hanging in the balance, it was freshman midseason call-up Owen Gaffney who sealed the deal, scoring the game-winning goal to clinch the Cubs’ 10-9 overtime victory over St. Margaret’s in the US Lacrosse Southern Section Finals on Saturday.

“I’m speechless right now. What an incredible game,” Loyola coach Seth Cohen said with the biggest of grins on his face. “[St. Margaret’s] jumped out to a two-goal lead early in the fourth, but then we came storming back, got it into OT, and then a freshman won the game for us. It was unbelievable.”

Coming off a big win over Palos Verdes in the LA finals, Loyola was one step away from claiming the Southern Section crown for the third year in a row. But the Cubs had to go through a rollicking St. Margaret’s side that overcame a five-goal deficit in its double-overtime victory over Foothill in the OC Section finals.

Saturday, overtime was not kind to the Tartans. The teams traded leads in the fourth quarter, with Gaffney giving Loyola the lead late only to see St. Margaret’s tie it up, and the game went to overtime. Both teams had chance in the first few minutes of the extra session and appeared destined for a second extra session.

That was the moment Gaffney morphed into the season’s hero, as he split a double-team late in the overtime period and slid a shot past Tartans goalie Zane Handy to win the Cubs their third consecutive Southern Section championship.

“We only had like 20 seconds on the clock, so I just tried to dodge and find someone open,” Gaffney said. “But I just ended up getting a shot off. But it was crazy and fun to do with the whole team, because I was brought up from JV midyear, so to win it with all these guys that embraced me and took me in is a really great feeling.”

In the early going, the game was a slow-paced affair with St. Margaret’s playing from behind most of the way. Every time the Cubs opened up a lead, the Tartans answered right back, keeping the score leveled 4-4 at halftime. Kaiser Fry (2 goals, 2 assists) and Henry Hasenberg (1g, 2a) did most of Loyola’s heavy lifting in the first half.

Offensively, Saturday’s final was riddled with big-game jitters that led to sloppy possessions from both teams. Thankfully for Loyola, a patient defensive effort, anchored by goalie Will Parducci (7 saves), proved to be just enough to make up for their miscues and face-off struggles.

The second half featured a much faster game, with each team desperately trying to gain the edge before the final horn. The Cubs seemed to have seized slight control, leading 6-5 at the end of the third, but the Tartans showed the same resiliency that won them the game against Foothill.

Kevin Groeninger (2g, 2a) and Garrett Kuntz (1g, 2a), who were silent in the first half, came alive in the fourth quarter, combining for three goals to put St. Margaret’s ahead 8-6. It was the first time Loyola trailed, and the Cubs quickly responded. Sophomore Matt Garvey (1g, 1a) and Fry scored to even the game once again.

“When we went down, I felt like [St. Margaret’s] were able to capitalize on our mistakes all day long,” Cohen said. “They also played zone against us, which gave my offense some fits and forced us to be more methodical, but I guess in the end it turned out OK.”

With Loyola reigning supreme for the third straight year, Cohen said he is looking forward to defending the title again next season. Despite losing 14 seniors, including key players like Hasenberg, Aiden Hesse, Robert Henderson, Wes Priestley, Patrick Casani and Liam Miller, Loyola still will have the likes of Alex Horowitz, brothers Kaiser and Speed Fry, Garvey, Parducci and, of course, Gaffney to lead the way.

“Winning is a habit that’s hard to break,” Cohen said. “I feel like we’ve built ourselves a culture right now that believes that we’re winners, and we got guys coming back, and we got a really good JV, so I would never count the Cubs out.”