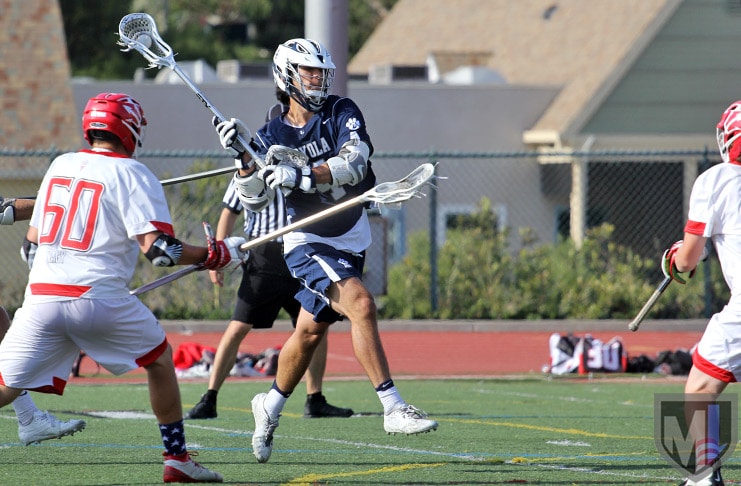 For the second year in a row, the Loyola Cubs shook off a regular-season loss to Palos Verdes to stun the Sea Kings in the US Lacrosse Southern Section North championship game. Last year, the stunner was an overtime game-winner. This year, it was three quarters of domination leading to an 11-5 victory.

The “heavyweight fight” analogy is used far too often, but it’s appropriate here. Loyola and Palos Verdes have been the best two programs in Los Angeles over the past two seasons. The Cubs are 40-8 in that time, while the Sea Kings are 36-8. Each has lost three times in that span to LA/Ventura-area teams: Loyola has lost to Palos Verdes twice and to Mission League rival Harvard Westlake, in overtime. PV has lost to Westlake and to Loyola twice — both in LA title games.

So it was only fitting that the two heavyweights met for the 2017 LA title Wednesday afternoon at Mira Costa HS.

The No. 1-seeded Sea Kings came out swinging, scoring on their first three possessions and rocking the Cubs back on their heels. The PV wings were winning ground balls on face-offs, and the offense was moving the ball and scoring with relative ease. All three of those early goals were assisted.

But the defending champs called time out, went to their corner and regrouped.

Coming out of the time out, trailing 3-0, the Cubs put the ball in the hands of senior Jonathan Partamian, who dodged hard down the right alley and pulled a bouncer low and away to make it 3-1. The Sea Kings answered, but junior Aidan Hesse won the ensuing face-off — he won 11 of 17 in the game — and took it himself, pulling the Cubs within 4-2. Then Partamian bounced in another off a hard right-handed dodge and it was 4-3.

Palos Verdes would score once more, with 1:33 left in the quarter, but that was it. Loyola held the Sea Kings scoreless over the final 38 minutes of play.

At first the Sea Kings seemed unfazed by Loyola’s counter-punching, continuing to move the ball as they did early on. But many of their passes didn’t connect. Trying to feed (or force?) the ball into the crease created turnovers. Then perimeter passes started glancing off sticks and out of bounds. Forced or unforced, Palos Verdes was turning the ball over.

When PV did shoot, Loyola goalie Joe Theuer swatted away everything that had even a hope of finding net. He finished with 15 saves. Eventually, the PV shooters began aiming for the edges rather than challenge Theuer in the heart of the cage.

Loyola, meanwhile, began converting on offense. Joe Peterson caught a rebound and scored to make it 5-4 with 8:08 to play in the first half, then Partamian scooped up a Sea Kings turnover and took it the distance, tying the game 5-5 with 4:16 left. A transition goal from Mason O’Hanlon gave the Cubs their first lead, 6-5, at the 1:27 mark.

A minute into the third quarter, Peterson dodged and lowered his shoulder, rocking his defender back. Peterson stepped away from the contact, cleared his hands and ripped in a goal for a 7-5 Cubs lead.

The score stayed that way for the next six minutes, but it was clear the Cubs had taken the game over.

Partamian scored his fourth of the game on a man-advantage with 4:34 left in the third quarter, and if there was any doubt left about who would win this game, it was erased in the closing seconds of the quarter when Ryder Mora zipped a pass into the crease that ricocheted off Henry Hasenberg‘s stick, then off his body and into the net.

Loyola led 9-5 heading to the fourth quarter, and it was all over but the trophy presentation.