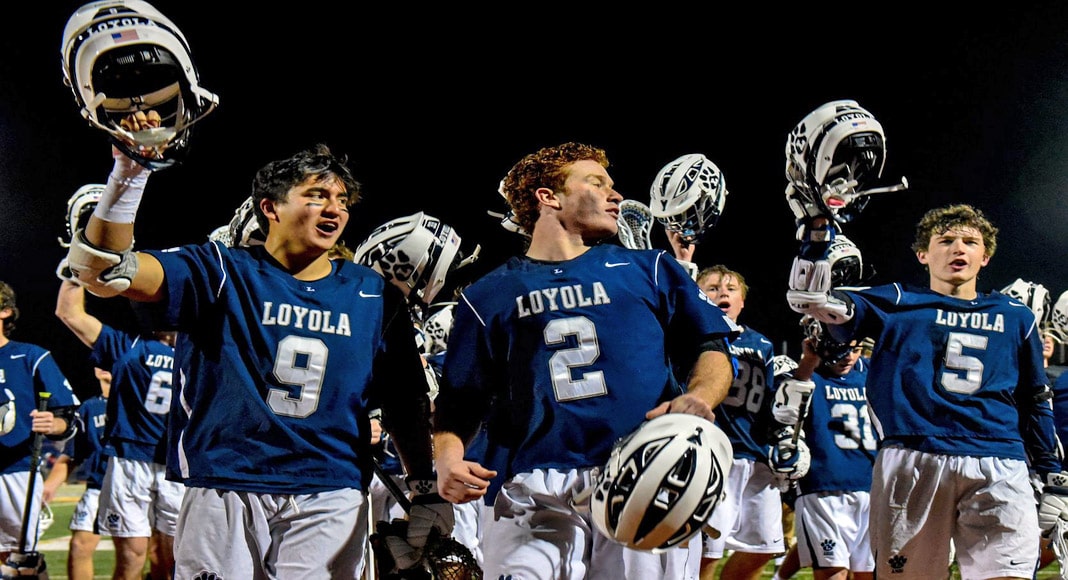 After getting edged out in overtime Saturday in its season opener, LA No. 1 Loyola broke into the win column in a big way Tuesday, posting a dominant 15-5 road victory over Los Alamitos.

Neither team had opened with an ideal result. The Cubs dropped a thriller to Foothill in a rematch of last year’s Southern Section title game, while the Griffins lost to Great Oak, 11-8.

However, the two-time section champions demonstrated quickly why they are still favorites to win the title, dismantling Los Alamitos for the start.

“It was a good rebound for us after a tough first loss against Foothill,” Loyola coach Seth Cohen said, “so we’re happy to get back on track.”

Coming into the season, Cohen and the Cubs faced the challenge of maintaining their high level of production while replacing eight of last year’s starters. Two games in, it appears they haven’t missed a beat.

After giving up a goal to Los Alamitos’ Ethan Campos in the opening minutes, Loyola was in the driver’s seat the rest of the way. The Griffins had no answers for the Cubs’ suffocating defense, which was powered by staunch performances from goalies Will Parducci and Cam Bieler (eight saves combined).

Loyola (1-1) also displayed a well-balanced offense, overwhelming the Los Alamitos defense with pure speed and skill from all angles. Ten different Cubs found the back of the net in the game, including a hat-trick from sophomore attackman Alex Horowitz. Jack Carolan and Liam Miller got in on the action as well, scoring two goals each.

The play of the night, however, would have to go to Loyola senior Patrick Casani. Late in the second period, the defenseman — a converted midfielder — stole a long clearing pass and returned it the length of the field, burying it past the Los Al goalie to put the Cubs up 6-1 at the half.

Los Alamitos (0-2) found most of its success in transition, but every time the Griffins managed to put one away, the Cubs answered back with goals of their own. Senior face-off specialist Aidan Hesse (Tufts) consistently earned possession for Loyola, winning 14 of 18 at the dot.

Campos finished with two goals for Los Al, while Trenton Jones, Lincoln Frazier and Julian each chipped in one goal.

Cohen said that even though he’s still tinkering with lineups, his players have acclimated to their new roles really well and have stepped up in place of their predecessors. Cohen also said that despite this big win, there is still a lot of season left to be played.

“There’s no rest for the weary,” Cohen said. “We play an incredibly tough schedule that’s humbling every single time we get on the field, so we’re going to take this win, we’re going to enjoy it, but we’re going to move on.”

Loyola will fly to San Francisco next for a game against NorCal powerhouse St. Ignatius on Thursday. Los Alamitos next plays at home against Santiago on Saturday.