Loyola Moves to No. 1 in Week 2 Coaches Poll 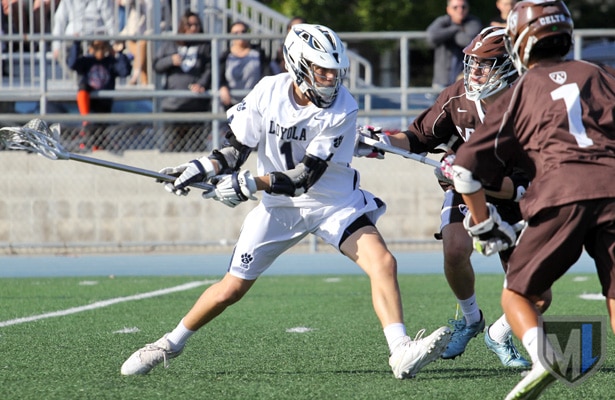 Losses last week by Palos Verdes and Westlake cleared the way for Loyola to take over the No. 1 position in the Week 2 US Lacrosse/MaxLaxLA coaches poll. The Cubs (4-1) received 13 first-place votes from the 20 ballots cast.

Harvard Westlake (3-1), previously No. 4, received six first-place votes after knocking off Westlake on Friday and moved up to No. 2.

The changes in the first two spots in the ranking set up a No. 1 vs. No. 2 clash Tuesday, when the Cubs visit Harvard Westlake in a Mission League contest.

Westlake (3-1) remains No. 3, and previous No. 1 Palos Verdes, though still receiving one first-place vote, drops to No. 4 after opening its season with road losses at Westlake and at St. Margaret’s Episcopal.

Entering the Top 20 this week are Cate School (1-1), which moved to No. 19 despite not playing last week, and Birmingham (4-0), which won 9-8 in overtime at Santa Barbara on Saturday.