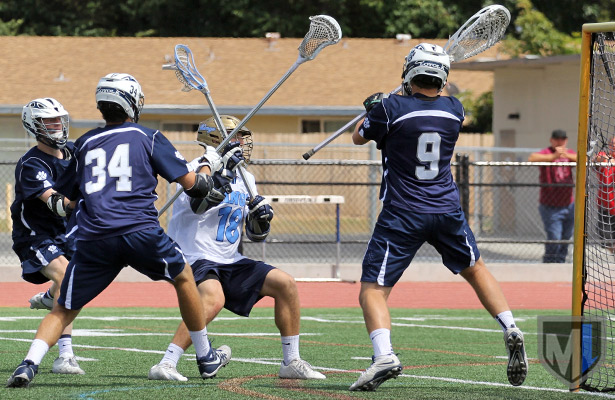 The Loyola Cubs put an exclamation point on their season Saturday — and put to rest any thought that the US Lacrosse Southern Section championship game was a mere formality for the Orange County representative — posting a decisive 10-6 victory over Corona del Mar and becoming the first Los Angeles team to hoist the trophy.

Loyola (20-4) was making its first appearance in the title game since 2009, when it lost to Foothill 10-7. Corona del Mar (20-2), which won the title in 2012, was seeking its second crown, and many observers expected the Sea Kings to get it. Motivated by comments on MaxLaxLA.com that Saturday would be a mere formality for the OC champs, the Cubs proved the observers wrong.

But that was the last easy goal CdM would get, as Loyola’s attacking zone defense, backed by junior goalie Joe Theuer, once again limited its opponents’ opportunities. The Cubs allowed 10 or more goals only five times in 24 games this season, and they held their opponents to six or fewer 16 times.

Still, Corona del Mar led 2-1 after the first quarter, and there still was some question whether Loyola could muster another championship performance after its overtime win over Palos Verdes three days earlier.

The Cubs answered those questions with an emphatic three-goal run to open the second quarter. Garrett Smith scored on a feed from sophomore Henry Hasenberg to pull Loyola even at the 10:50 mark of the second period. Ten seconds later, sophomore face-off middie Aidan Hesse won the draw and took it to the rack himself to give the Cubs their first lead at 3-2 — a lead they’d never relinquish.

It was one of four second-quarter face-offs Hesse won against CdM’s Simaan, who will play at Brown next year. For the game, Hesse battled Simaan to a virtual draw, winning nine of 20 face-offs. Without the possession edge to which it has become accustomed, Corona del Mar spent a lot of time playing defense.

Loyola junior Ryder Mora stretched the Cubs’ lead to 4-2 with just under eight minutes to play before CdM’s Eric Fries broke the run and pulled the Sea Kings back within a goal at 4-3 with 7:04 left. But two outside rips from Loyola junior Jonathan Partamian made it 6-3 and let everyone know the Cubs were not going away any time soon.

A Jordan Greenhall goal in the closing seconds made it 6-4 Loyola at halftime, but the Cubs had held CdM’s offense to three goals — not counting the fast-break goal off the opening face — and had produced six first-half goals against a team that had allowed an average of only six per game all season. Moreover, Loyola had goals from five different players and assists from two more. The Cubs’ depth and versatility was on full display.

After Stephen Von der Ahe scored his second of the game to pull CdM to within one at 6-5 with 8:36 to play in the third, the Cubs put together another three-goal run that featured two for the highlight reel.

First, Hasenberg dodged up the left side from X and threw a right-handed, back-handed shot past CdM goalie Nick Guizan. The officials discussed it for a long time but ultimately ruled Hasenberg’s shot hit the side netting inside the pipe and bounced out — goal Loyola, 7-5.

After Mason O’Hanlon ripped one from the outside to make it 8-5 just 20 seconds later, the junior struck again. O’Hanlon cut into the middle from X and leaped for a high entry pass from Mora up top. He caught the pass, landed and threw a no-look, back-handed bouncer past Guizan for a 9-5 lead with 3:42 still to play in the third.

The Cubs not only were beating the Orange County champion, they were making it look easy.

Will Favreau scored what would be Corona del Mar’s final goal with 32 seconds left in the third quarter, cutting Loyola’s lead to 9-6, but the Cubs would allow no more. The defense, and most notably Theuer, blanked the Sea Kings in the fourth quarter. Theuer finished with 11 saves, five of them coming in the final frame with CdM desperately firing at the cage. The Cubs successfully cleared the ball eight times in the fourth, ending CdM possessions and burning time.

Sean Smith provided the final Loyola goal, his second, on a pass from O’Hanlon with 7:34 to play.

And just like that, LA had broken through. The Cubs finished an historic season with a no-doubt victory and brought the Southern Section trophy north for the first time.

O’Hanlon (2g, 2a) was named the Alpha Lacrosse offensive player of the game, and Theuer was the defensive recipient. Seven different Cubs scored goals, and five of the goals were assisted by four different players.

Partamian, O’Hanlon and Sean Smith each scored twice for Loyola, and Garrett Smith, Hasenberg, Mora and Hesse each scored one.