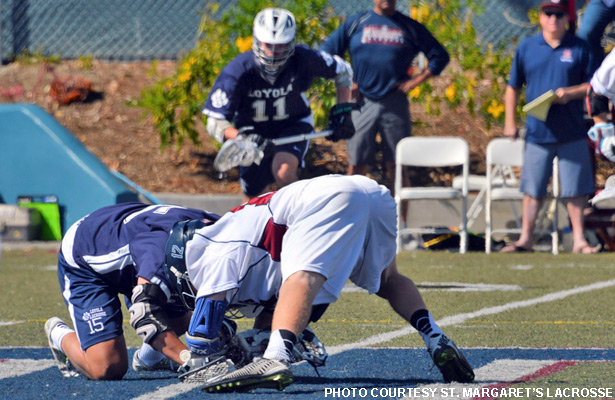 The Loyola Cubs, ranked No. 2 in the LA preseason coaches poll, wasted no time in declaring their intention to be No. 1 this year, traveling south Saturday and posting a 9-7 win over defending Southern Section champion St. Margaret’s.

Loyola actually led 8-4 entering the fourth quarter before the Tartans rallied to within 8-7. But Cubs senior LSM Max Neblina won the faceoff after that last St. Margaret’s goal, and Loyola had possession with 1:24 left. The Tartans pulled their goalie to double-team, and Cubs senior Sean Smith scored on the empty net for the final margin.

Smith and junior middie Ryder Mora each had two goals and an assist for Loyola, and junior attack Garrett Smith had one goal and one assist. Junior middies Jonathan Partamian and Emmett Reilly, senior attack JP Hatch and freshman middie Speed Fry each scored once, and senior middie Michael Lira had an assist.

Loyola sophomore Aidan Hesse battled St. Margaret’s freshman Stuart Pollard at the faceoff dot, winning 3 of 5 early on. The Tartans finished with a 9-7 edge in faceoffs, according to the Tartans. scorebook.

Senior Samuel Harnisch, who is committed to Denver, scored four goals for St. Margaret’s, and Nick Shanks had three and one assist. St. Margaret’s goalie Payton Fales finished with 12 saves.

St. Margaret’s scored the game’s first goal, but Loyola led 2-1 after one quarter. The score was tied 3-3 approaching halftime, but Sean Smith scored his first to give the Cubs a 4-3 lead at the break.

Goals by Mora, Partamian (on assist from Garrett Smith) and Fry made it 7-3 Loyola in the third. St. Margaret’s got one back to trail 7-4, but Mora’s second made it 8-4 at the end of the third quarter.

St. Margaret’s rallied, making it 8-6 with 2:28 left, then 8-7 about a minute later before Neblina won possession, and the Cubs wrapped up the impressive opening win.