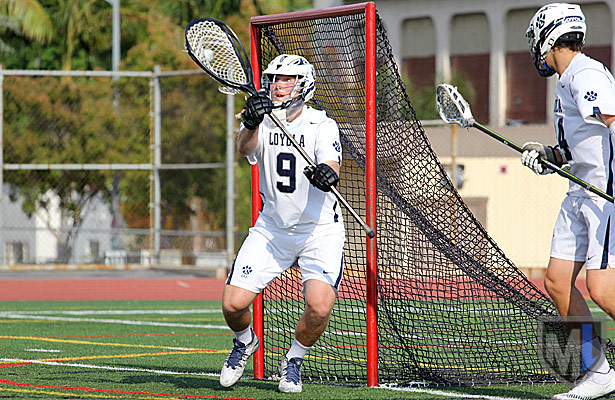 Rising senior goalie Joe Theuer, a two-time All-American for Southern Section champion Loyola, announced his commitment to NCAA D-III Tufts on Friday. Theuer was in Baltimore at the time, competing with the West regional team in the Under Armour Underclass Tournament.

“I chose Tufts because they can provide me with an unmatched education and because I wanted to play lacrosse at a highly competitive level at a well-established program,” Theuer said via email. “It’s only an added bonus that the school is so close to Boston.”

Tufts has won the NCAA D-III championship three times in the last seven seasons — 2015, 2014 and 2010 — and has won the NESCAC (New England Small College Athletic Conference) championship seven times. Last spring, Tufts finished 20-3 overall but lost 14-13 in the NCAA title game to Salisbury, falling just short of a third consecutive NCAA title. It was the Jumbos’ fifth appearance in the title game since 2010.

“I was excited to hear that Joe picked Tufts,” Loyola coach Seth Cohen said, “because it affords him the opportunity to play top-notch lacrosse and get a first-rate education, two things I know are important to Joe. Tufts s a great school with a few national championships already under their belt. I think Joe has a chance to make an immediate impact on a team that’s already full of talent.”

Congrats to '17 Goalie Joe Theuer on his commitment to @TuftsLacrosse pic.twitter.com/v8FTQFVfcJ

However, only a few hours after Theuer committed to Tufts, news broke that Jumbos’ head coach Mike Daly, largely responsible for the team’s success over the last few years, was leaving to take over at NCAA D-I Brown.

“It came as a pretty big surprise to me that Coach Daly was going to Brown,” Theuer said. “I found out about Coach Daly’s decision later on in the day (after) I committed, which was kind of a bummer. It doesn’t really affect my decision, though, because I have faith that Tufts can find another great head coach very soon.”

Whoever that coach is will be getting a goalie who has been named first-team All-Mission League three times in leading the Cubs to a 50-13 record in three seasons, including last spring’s US Lacrosse Southern Section title. In that game, a 10-6 win over Corona del Mar, Theuer made 11 saves and was named defensive player of the game.

“Joe has a great combination of size and quickness,” Cohen said. “He knows how to play the angles and force bad shots. He’ll step out and use his body, or use his quick hands to snag the popcorn and turn it into a fastbreak. Joe makes the spectacular look routine.”

With a number of elite players returning — including Division I commits Jonathan Partamian (Syracuse), Ryder Mora (Maryland) and Nick Mohler (St. John’s) — the Cubs are poised to do big things again next year.

“He doesn’t have anything left to prove, but I still expect him to compete at the highest level,” Cohen said. “Joe expects that for himself. He sets a high bar. We’ve tasted success, and we’ve got the talent returning to believe a repeat is possible. He’s still hungry! Joe wants to finish his high school career, with his buddies, as a champion.”

Off the field, Theuer repeatedly cited Tufts’ academic reputation as a major factor in his decision.

“I would like to study business or economics,” he said. “Tufts has a fantastic economics program, and the allure of Tufts’ great academics definitely drew me in.”

Theuer is the latest in a line of Los Angeles-area lacrosse players heading to NESCAC schools:

A few seasons from now, Theuer faces the prospect of defending shots from Smith, his teammate the last three years at Loyola.

“It’s definitely a scary thought that I could have Sean Smith shooting on me in games a couple of years down the road,” Theuer said. “I hope that he’ll let me save at least a couple when I go against him in the future.”