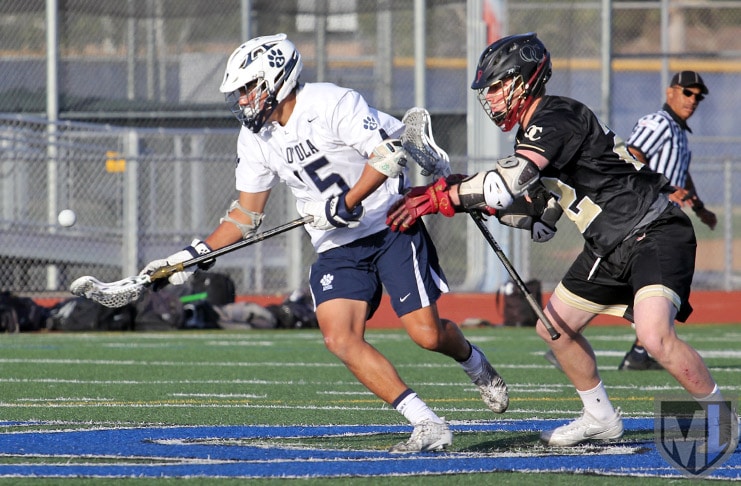 Loyola senior middie Aidan Hesse, a two-time All-Mission League selection and two-time member of the Under Armour Underclass West team, announced earlier this month that he has committed to the admissions process at NCAA Division III Tufts University.

“I chose Tufts because of the excellent educational opportunities and the ability to continue to play lacrosse at a highly competitive level,” Hesse said via email. “I look forward to being close to Boston and close to many people I have played with over the years. I’m also very excited to continue to play with Joe Theuer at the next level. Finally, Coach [Casey] D’Annolfo, [John] Uppgren and [Jon] Sax were great to me throughout the process and are a big part of my decision to attend Tufts.”

Hesse’s former Loyola teammate Theuer, a three-time All-American goalie, will enroll at Tufts this fall. When he plays for the Jumbos, Hesse will face former Cubs teammate Sean Smith (Connecticut College), along with a number of other LA players who play for schools in the NESCAC (New England Small College Athletic Conference).

In addition to his all-league and Under Armour Underclass accolades, Hesse also was a second-team selection to the US Lacrosse Greater LA South All-Area Team as a sophomore. He also was named Loyola’s Rookie of the Year as a sophomore and earned the team’s Grunt Award last spring.

Loyola coach Seth Cohen was effusive in his praise for Hesse in comments sent via email:

“It’s hard to deny the importance of the face-off in the modern game of lacrosse,” Cohen wrote. “Having a strong face-off unit can greatly increase your offensive possessions, which can lead to more scoring opportunities. A strong face-off unit can help start a streak or stop an opponent’s momentum. Wing play and ground balls are a huge part of it, but at the center of everything is the guy at the dot.

“We’ve been fortunate to have Aidan Hesse hold that spot down for the last two years,” he continued. “Aidan has a great move, incredible speed and a strong work ethic. Going into his sophomore year he was told he’d need to improve his face-off abilities if he hoped to make varsity. He really put in the time and became a huge asset.

“I’m confident Aidan will succeed at the next level because he has improved his game, and expanded it, every year he has been with the team. Going into his junior year, we liked his move and his speed, but his strength was an issue…he came back jacked, putting on 20 pounds of muscle. Throughout the year he practiced his craft tirelessly.”

With Aidan Hesse taking the majority of the team’s face-offs the last two seasons, Loyola has gone 41-8, averaging 13 goals per game and winning back-to-back US Lacrosse Southern Section championships. Last year, the Cubs’ went 21-4 against a schedule that was rated the ninth toughest in the state according to LaxPower.com’s formula. Their four losses came against St. Ignatius, No. 1 in the state in LaxPower’s computer rating; Torrey Pines, No. 5 in the state; Palos Verdes, No. 8; and Harvard Westlake, No. 9. Hesse missed the majority of that Harvard Westlake loss after suffering a knee injury on the game’s third possession.

“Many guys shy away from the term FOGO [face-off, get off],” Cohen wrote. “They are afraid that they won’t be seen as ‘real’ lacrosse players. Aidan has embraced his role and dedicated himself to be the best FOGO he can be! I don’t think there is a more valuable specialty player, other than possibly goalie, on the team.

“He’s a self-motivated player,” Cohen continued. “Aidan will work on his drills alone during practice or gather up all the face-off guys, on varsity and JV, and run a clinic. As the face-off unit started to jell this year, we began to explore ways to better incorporate our wings, create fast-break opportunities, and take advantage of matchups off substitutions. All of that was possible because of Aidan’s ability to control the ball on the face-off. He won 73 percent of his face-offs for the year, playing some of the toughest opponents on the West Coast.

“He has improved every year so far, and I have no reason to believe that he won’t be even more dominant this year. Tufts is getting a great FOGO, but they’re going to have to wait a year — this year he’s still a Cub!”