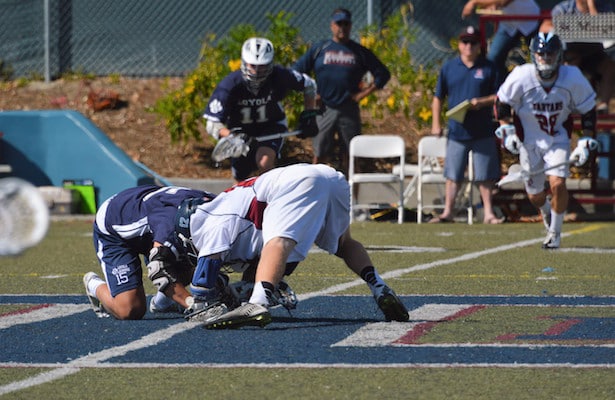 The 2016 season opened on Saturday with two of the top teams from Los Angeles and Orange County facing off in the first round of the Orange County Invitational. Loyola defeated St. Margaret’s, the defending Southern Section champions, by a score of 9-7 in a game that was not decided until the final minute.

St. Margarets jumped out to an early 1-0 lead when Samuel Harnisch (Denver) scored the first of his four goals. However Loyola scored the next two to lead 2-1 at the end of the first quarter. The teams continued to swap goals until a Sean Smith (Connecticut College) goal gave the Cubs 4-3 halftime lead.

Loyola’s momentum carried over into the second half. Unanswered goals by Ryder Mora (Maryland), Jonathon Partamian (Syracuse) and freshman Speed Fry made it 7-3. Nick Shanks (Tufts) broke the St. Margaret’s scoring drought before Mora’s second made it 8-4 after the third quarter.

Harnisch sandwiched two goals around one from Shanks to make it an 8-7 game with 1:49 showing on the clock. Loyola’s LSM, Max Neblina, slowed down the Tartans’ momentum by winning the ensuing faceoff, and the Cubs called time out with 1:24 left. The Tartans pulled goalie to pressure Loyola after the timeout, but the Cubs scored in the empty net to finalize the 9-7 score.

Harnisch (4 goals) and Nick Shanks (3 goals, 1 assist) finished with four points apiece to lead the Tartans offense. Fales ended the game with 12 saves. Freshman Stuart Pollard (pictured above) filled some big Tartan shoes on Saturday by filling in at the faceoff X for injured senior Erik Suh. Pollard finished the game 9/16 win ratio to help keep his team in the game and stage the late comeback attempt.

Next up: St. Margaret’s hosts Great Oak on March 2 in Round of the Orange County Invitational. Loyola hosts Oak Park on March 3 in another OCI matchup.