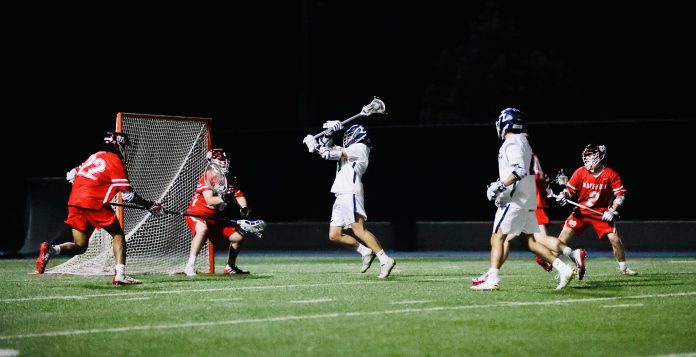 Another barn burner early in the 2021 season last night at Loyola High School as OC upstart No. 2 Mater Dei came to town to take on the No. 5 Cubs. It took overtime to decide this one, but Matteo Silvestri came through in overtime with his fourth goal of the game to hand Loyola the 9-8 W and close out the balloting for the 2021 “What me worry?” award.

Silvestri is gonna be hard to beat.  Proving the value of a short memory, Silvestri shook off a bad error that allowed Mater Dei to tie the game in the last 30 seconds of regulation and then buried the game winner in the first 30 seconds of OT. Silvestri collected a pass from Owen Gaffney and ended the game with a low and away walk off.

The end of the game was wild.  As Loyola was killing the clock with a one goal lead and 30 seconds left in regulation, Silvestri threw away a transfer pass.  Mater Dei took advantage of the opportunity by getting the ball to the offensive end , calling a TO and tying the game with three  seconds to play in the game.  Matt Gottfried won the first faceoff in overtime and dished off to Gaffney driving the right alley, Gaffney hit a nasty skip pass to Silvestri who buried it for the win 9-8 final.

Gaffney was so good last night.  The little things that didn’t show up in the score book separates him from the pack.  That’s what an  elite player looks like, and this is a classy kid, it’s no wonder Harvard head coach Gerry Byrne was high on this youngster.

Pace of play was medium with Loyola playing zone and Mater Dei playing pressure man defense.  Neither team had more than a two goal lead.

Mater Dei’s Tyler Curry has done an excellent job the last couple years, improving physically and polishing his game at close D.  He is a different player than he was two  years ago at Edison High. The senior looked very good.

For Loyola Jack Shoemaker,  Jack Wynperle  and Preston Barnes were super active even in a zone and tough on ground balls while Jake Tom played both LSM and close.  Coach Harsell, defensive coordinator for Loyola, made some nice adjustments to slow down the Monarchs.

Gottfried had a major impact on the game.  He won some clean on the  first move and some he just scrapped it out and won the contested ground ball.  He went 15 for 21 just a tick under 72%, went beast mode when it counted.  Big numbers.  He was a game changer.

Gaffney factored in the last five Loyola scores in the game.  He had an assist, goal, ground ball to a fast break ( hockey assist), and assist and the assist in OT.  one goal and four  assists on the night.

Shout out to Aidan Lee of Loyola, kid got rocked by a shot gone array on the hand/wrist in the fourth quarter that had velocity, could hear it.  Was obvious he was hurt but he fought for the ground ball and won it, threw to his teammate and subbed off holding his arm.  I’m  guessing that’s sore today.

Nick Colignon had a very good night between the pipes for Mater Dei with 13 saves.

Great action both ways all night.   Once again thanks to Loyola HS for allowing MaxLax to cover the game.  Classy program with plenty of hardware in the trophy case, was fun to watch this one!