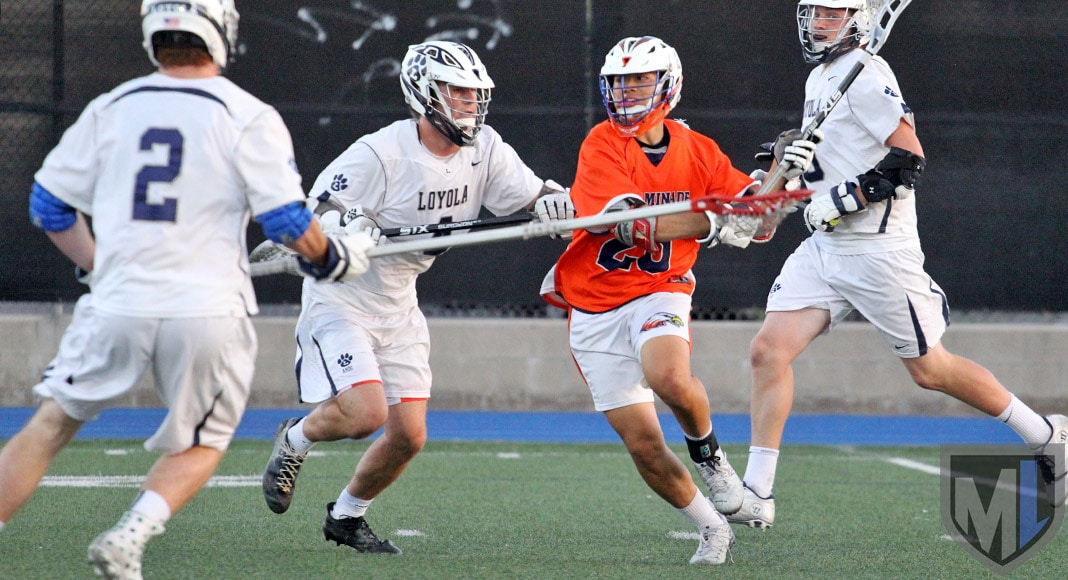 The Loyola defense limited visiting No. 4 Chaminade to one goal in the second half Tuesday, enabling the No. 1-ranked Cubs to secure a 9-4 victory and a perfect 5-0 record in the Mission League regular season. The victory also secured for the Cubs the top seed in the first year of the Mission League championship tournament, which begins Saturday.

For the first half Tuesday night, Chaminade appeared poised to meet that challenge. The Eagles led 3-2 late in the second period behind a stellar goaltending performance from Nick Carney, who made eight saves in the first half and 12 in the game.

Loyola tied it with 2:14 left in the half on a transition goal from Wes Priestly, assisted by Kaiser Fry. A minute later, Liam Miller picked up a ground ball in the crease and tossed it into the net, giving the Cubs a 4-3 halftime lead.

The Eagles committed turnovers on their first three possessions of the second half, and Loyola’s Aidan Hesse won three third-quarter face-offs, limiting Chaminade’s offensive chances. The Cubs took a 6-3 lead midway through the period and were in control.

“We lost a lot of mental focus,” Eagles coach Steve Lane said. “Not a whole lot of great things to say right now. Pressure of the game, and we didn’t respond well.”

Nico Rabushka scored Chaminade’s only second-half goal with 2:32 left in the third quarter, and that was pretty much the end for Chaminade’s offense.

“I thought we got a great game out of our goalie; he played tremendous,” Cohen said. “The defense also stepped it up in the second half. I think we let in one goal in the whole half, so I like that.”

Cubs goalie Will Parducci finished with at least 10 saves, according to the Loyola scorebook, many of them on what appeared to be certain Chaminade scoring opportunities.

Fry led Loyola’s offense with three goals and two assists, and Miller and Matt Garvey each scored two. Priestly and Henry Hasenberg scored one each.

Mac Griffin (1g, 1a) led Chaminade, and Owen Larson, Andy Dyer and Rabushka each scored one.