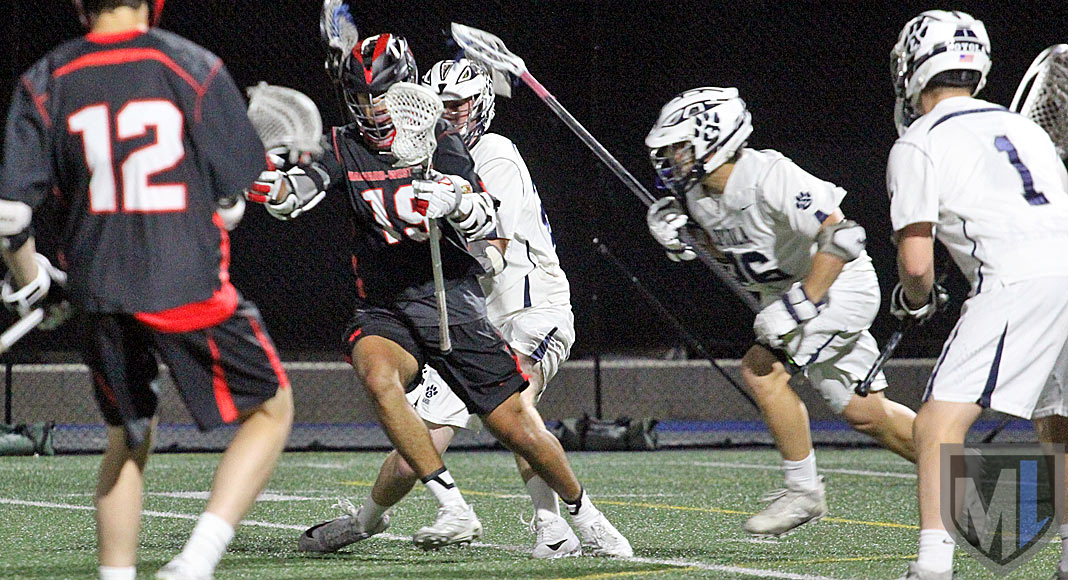 Save for one brief flurry at the end of the third quarter, No. 1 Loyola bottled up No. 3 Harvard Westlake’s explosive offense Tuesday night and escaped with a 9-7 Mission League victory. The Cubs limited the Wolverines to three goals in the first half and blanked them in the fourth quarter.

But there was that third quarter, in which Harvard Westlake eliminated Loyola’s two-goal lead in the blink of an eye.

The Cubs had led 4-3 at halftime and took a 7-5 lead with 1:59 left in the third quarter. But freshman Brody Listen scored with 19 seconds left to pull the Wolverines within one, and Donovan Econn won the ensuing face-off, leading to an Alec Watts goal with two ticks left on the clock, tying the game 7-7.

But that was all the Wolverines would get, as Loyola’s defense — which hasn’t allowed a team to reach double-digit scoring since its opening game — pitched a shutout in the fourth quarter. Most impressively, the Cubs withstood a Harvard Westlake possession in the final five minutes that lasted more than three minutes and featured multiple shots without surrendering a goal.

“Their goalie made some unbelievable saves, right on the crease,” Wolverines coach Erik Krum said. “Their defense stood strong, and not only did they have a great defensive stand, they cleared the ball, got it down to the other end and possessed the ball for the remainder of the time. They did a really good job tonight.”

Loyola coach Seth Cohen called his defense the team’s “heart and soul,” but he also tipped his cap to a resourceful offense that produced nine goals from seven different players despite spending a lot of time on defense or in transition.

“I felt like we played a lot of defense this game,” Cohen said. “They had a slow-down, methodical offense. We were trying to take advantage of some of those early opportunities, and again, we had too many turnovers and didn’t really set up in our offense nearly as much as I’d like us to.

Tuesday, sophomore Matthew Garvey was among those who stepped up. He had two goals and an assist, including a third-quarter goal that made it 6-4 when he followed his own shot and poked the rebound away from Wolverines goalie Alex Rodriguez and across the goal line.

After Harvard Westlake had tied the game to end the third quarter, junior Ronan Gallagher scored off a pass from Alex Horowitz just after an extra-man situation had expired, restoring Loyola’s lead with 10:52 to play. A minute later, freshman Owen Gaffney found Wes Priestly with a long skip pass for the goal that put Loyola up 9-7.

Garvey and Horowitz each finished with two goals and an assist, and Priestly had one goal and one assist. Speed Fry, Liam Miller, Aidan Hesse and Gallagher each scored one goal.

Asher Early scored Harvard Westlake’s first five goals as the Loyola defense bottled up Wolverines star attackman Paul Rodriguez. He recorded two assists in the game but managed to squeeze off only six shots and put only one of them on cage.

Tuesday was the third consecutive loss for Harvard Westlake (6-5), which lost one-goal games at La Costa Canyon and Coronado over spring break. The Wolverines play at Crespi on Saturday.

Loyola (12-3) won its seventh in a row and held an opponent to seven goals for fewer for the eighth time. The Cubs play at Cathedral Catholic (San Diego) on Thursday.